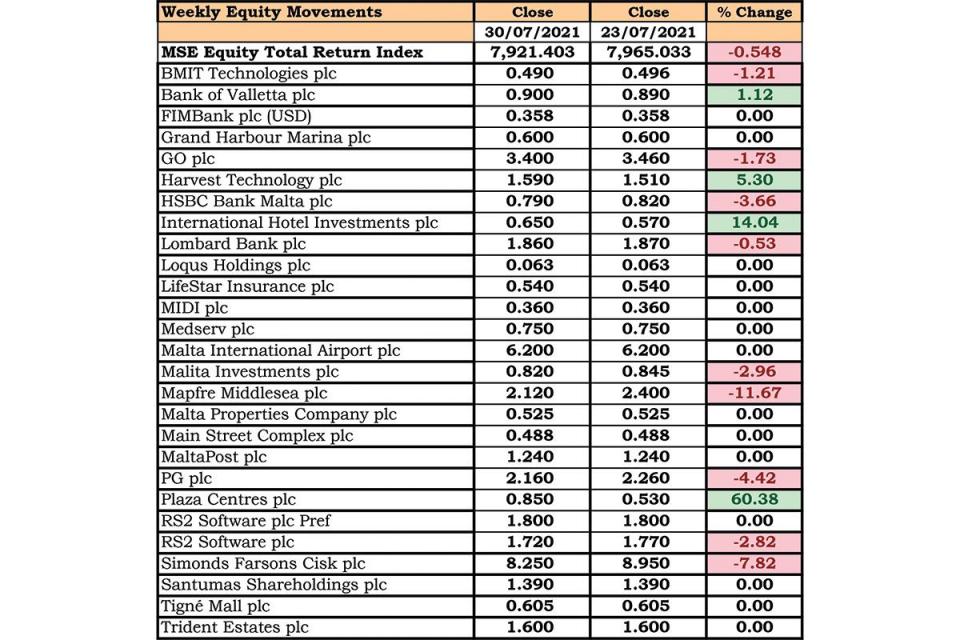 Similar to last week, turnover was €0.4m. Fifteen equities were active, as nine decreased, four gained, while two remained unchanged. The MSE equity index is down by 6.5% since the beginning of the year.

In the banking sector, Bank of Valletta plc (BOV) shares trended 1.1% higher, as the bank announced positive half-yearly results. The bank’s equity was the most liquid, as 109,093 shares changed ownership over fourteen deals, with a value of €97,833. BOV shares finished the week at €0.90.

Last Thursday, the bank’s Board of Directors approved the group’s and bank’s condensed financial statements for the six-month financial period ended June 30, 2021.

BOV reported a profit before tax of €25.9m, representing a return on equity of 4.8%. This result includes the effect of investment activities in Anti-Financial Crime Transformation and BOV 2023 Strategy of €17.1m.

While the Group is maintaining a cautious stance, credit provisions saw a net release of €3m for the first half of 2021.

Both net interest income and commission and trading revenues increased by 1.5% and 11.3% respectively when compared to the first half of 2020.

Despite the momentum in the loan book, the liquidity position remained very strong with cash and short-term funds increasing by €365m in the first half.

The bank’s equity saw an increase of 1.2% during Wednesday’s session but declines of 3% and 1.9% during the following two sessions impacted the shares negatively.

Telecommunications company GO plc ended the week at €3.40 – a week-on-week drop of 1.7%. Five trades with a trading value of €16,731 were executed. GO shares are down 4% since January.

On Wednesday, MIA’s board approved the group’s interim financial results for the six months ended June 30, 2021.

Total revenue during the period was €12.6m resulting in a decrease of 16% when compared to the same period last year. Operating costs declined by €1m or 11.7%, while total expenditure amounted to €10.2m. The company registered a net loss of €2.7m.

RS2 Software plc shares continued to trend lower, as the equity shed a further 2.8%. The equity closed at €1.72 and is down by 14% since the beginning of the year.

Harvest Technology plc gained 5.3% over the past week, with a trading value of roughly €13,920 across four transactions. The equity closed the week at the €1.59 level.

The company announced that the Board of Directors will meet on August 3 to consider and approve the interim financial statements of the Company for the six-month period ended June 30, 2021 and the distribution of an interim dividend.

This week’s trading sessions saw Mapfre Middlesea plc plunge by 11.7%. This drop resulted from one transaction with a mere trading value of €182 on Monday. The equity closed the week at €2.12.

Last Wednesday, the Board of Directors of Mapfre Middlesea plc considered and approved the unaudited financial statements for the financial half-year ended June 30, 2021.

The company experienced a positive performance in their general business and long-term premiums, with an increase of 7.5% and 31.4% respectively.

A total of 74,800 shares changed ownership across seven transactions.

International Hotel Investments plc shares gained 14%, as the equity finished the week at €0.65. Six trades worth €12,328 were executed on Thursday. The share price of the hotels’ operator is down by 9.7% on a year-to-date basis.

Malta Properties Company plc (MPC) traded flat during the week at €0.525, as 7,820 shares changed ownership over two deals. MPC shares are up by 5% year-to-date.

Plaza Centres plc was the best performing equity, as it gained 60.4%. This rise in the share price resulted from a thin volume of 1,100 shares, with a trading value of €935.

During the meeting of the Board of Directors of Plaza Centres plc held on July 28, 2021 the Company’s interim financial statements for the six months ended June 30, 2021 were approved.

Profit before tax decreased by 28.5% to €436,116. In the first half of 2020, the Group was still generating rental revenue from Tigne’ Place before the property was eventually sold during that year. Following the disposal of Tigne’ Place Commercial Property owned through Tigne’ Place Limited, the board considered and approved placing Tigne’ Place Limited in voluntary liquidation.

In the first three months of 2020, the Group was generating full rental revenue from its retail shops. During the current year, revenue experienced the impact of further shutdowns of retail shops resulting in lower rental income for the period.

During the current financial period Plaza Centres plc received a dividend of €3.4m from the subsidiary company.

In the Prospects MTF market, activity was spread across four transactions worth €65,884.

This article, compiled by Jesmond Mizzi Financial Advisors Limited, does not intend to give investment advice and the contents therein should not be construed as such.

The company is licensed to conduct investment services by the MFSA and is a member of the Malta Stock Exchange and the Atlas Group. The directors or related parties, including the company, and their clients are likely to have an interest in securities mentioned in this article.

Independent journalism costs money. Support Times of Malta for the price of a coffee.