USDCHF Powers Back, Crossing above its 50- and 200-SMA - Action Forex

USDCHF powered back from its late December low, halting a five session losing streak and crossing above the 50- and 200-day simple moving average (SMA). The cautiously bullish outlook for the pair is maintained despite failing to mark yet another successive higher low in December.

Short-term momentum indicators are supporting a positive bias for the pair. The RSI is found above its 50 neutral mark, while the MACD is looking ready to cross above zero, which would be an encouraging signal of strengthening positive momentum.

Should the bulls maintain control, initial resistance might be found at the 0.9241 level. Surpassing that point could open the door towards the 0.9294 obstacle before buyers eye the 0.9370 barrier. A break above the latter could strengthen the pair’s positive momentum, sending the price to test its April 2021 high of 0.9472.

On the flip side, if the price breaks below the 50-day SMA currently at 0.9203, sellers could shift their attention towards the region which consists of the 200-day SMA and the 0.9157 barrier. A break below that crucial point could pressure the price towards the congested region which encapsulates the 0.9100 and the 0.9084 hurdle.

In brief, despite losing its consecutive higher low streak, the pair’s outlook is still cautiously bullish. For sentiment to change, the bears would need to break below the 200-day SMA. 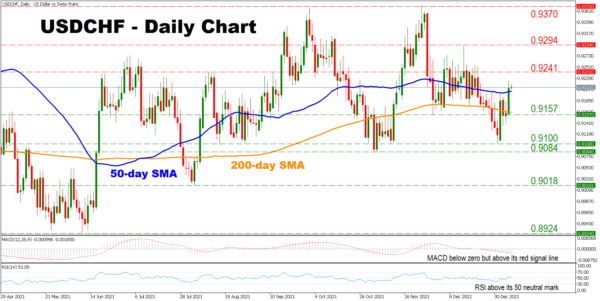 XM is a fully regulated next-generation financial services provider of online trading on currency exchange, commodities, equity indices, precious metals and energies, with services to clients from over 196 countries worldwide. Founded in 2009 by market experts with extensive knowledge of the global forex and capital markets and with the aim to ensure fair and reliable trading conditions for every client, XM has reached international recognition by virtue of its unbeatable execution of orders, spreads as low as zero pips on over 50 currency pairs, gold and silver, flexible leverage up to 888:1, and personalized customer engagement to foster clients’ success.