USD remained soft against some of its counterparts yesterday as the Omicron variant of the pandemic still dominates the headlines as it has a firm grip over a number of countries. Nevertheless, the low hospitalisation numbers of the Omicron variant seem to create some optimism in the markets which tended to drive safe haven JPY lower against the USD, while riskier currencies such as the GBP and AUD seemed to gain.

However Aussie traders could also be keeping an eye out for the release of Chinas’ NBS December PMI figures in order to gauge the pace of expansion of economic activity, especially in the manufacturing sector. The release could be of great importance particularly for Australian exporters of raw materials in order to build expectations for future orders to come from their Chinese customers.

Across the world we note that tensions between the US and Russia about Ukraine seem to intensify and could create some flights towards safe havens should the situation get out of hand, yet US President Biden and Russian President Putin are scheduled to talk in an effort to defuse the situation. As for precious metals it should be noted that Gold’s price also remained rather soft failing to take advantage of the weakening USD yesterday possibly also due to the rise of US yields which reduced the attractiveness of the shiny metal and despite its price rising for the month of December is about to end the year lower.

We also must note that US stockmarkets have shown some mixed signals given that on the one hand Dow Jones briefly touched new record highs yesterday while on the other hand Nasdaq was a bit on the retreat. As for financial releases we note from the US the release of the initial jobless claims figure which is expected to rise slightly and thus could be signalling a pause in the tightening of the US employment market. Last but not least we tend to maintain our worries for TRY as the currency seems to have some bearish tendencies and should they intensify, CBTs’ market interventions could prove to be fruitless.

The USD Index edged lower yesterday staying below the 96.15 (R1) line despite an attempt to break it and remain above it. It should be noted that the RSI indicator below our 4-hour chart was below the reading of 50 indicating a bearish sentiment of the market for the Dollar, yet seems to be recovering ground, which could imply that the bears are losing steam. We tend to maintain a bias for a sideways motion of the index, yet the bearish tendencies should not be pass unnoticed. Should the bears actually take control over the index, we may see its price action breaking the 95.60 (S1) support line and aim for the 94.95 (S2) level. Should the bulls be in charge of the index’s direction, we may see it breaking the 96.15 (R1) resistance line and take aim of the 96.65 (R2) resistance level.

AUD/USD rose yesterday breaking above the 0.7230 (S1) support line. The RSI indicator below our 4-hour chart is above the reading of 50 signaling a bullish sentiment for the pair yet the indicator seems to be dropping which could imply that the bulls are present yet may be on the retreat. We tend to maintain a bias for a sideways motion, yet the bullish tendencies of the pair should be taken in to account. Should the buying interest for the pair be renewed we may see AUD/USD breaking the 0.7290 (R1) resistance line and aim for the 0.7365 (R2) level. Should sellers be in charge of AUD/USD’s direction, we may see it breaking the 0.7230 (S1) support line and aim for the 0.7170 (S2) level.

Other highlights for today and early tomorrow

Today in the European session we note the release of the UK Nationwide House prices for December and from Switzerland the KOF indicators also for December. Later we get from the US the weekly initial jobless claims figure and during tomorrow’s Asian session we get China’s NBS PMIs for December. 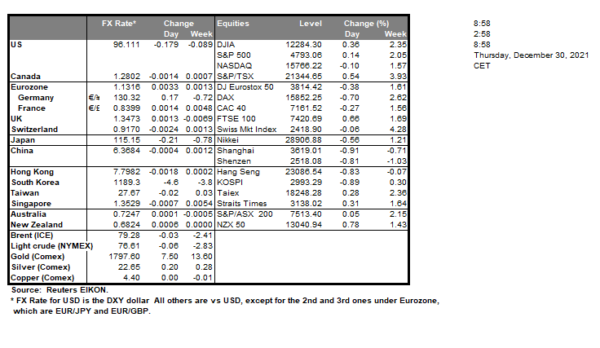