People stand in front of the spice market also known as the Egyptian Bazaar in Istanbul, Turkey.   © Reuters

ISTANBUL -- Turkey is considering a range of new lira-based financial products that the government would guarantee against inflation losses, a top government official told Nikkei Asia.

These would follow up on a scheme launched in mid-December to protect local-currency bank deposits against losses from foreign exchange fluctuations.

Along with new proposals to encourage Turkish households to exchange physical gold stashed under mattresses for certified gold products, the measures are designed to inject fresh blood into the financial system and arrest the depreciation of the local currency.

Goksel Asan, head of finance in the office of President Recep Tayyip Erdogan, said in an interview Friday that the government is working on various new financial products to put the nation back on track economically and ultimately reach its stated goal of a current-account surplus.

"The Treasury and Finance Ministry is working on inflation-indexed instruments," Asan said. "I do not think that it will be another bank deposit instrument, which would mean competing with the new forex-indexed lira deposits," he said, hinting at bonds without specifying.

Asan also suggested that work is underway to bring part of an estimated 5,000 tons of gold and gold jewelry into the financial system by introducing gold certificates to be exchanged with physical gold. These gold items, stashed away in homes and bank vaults, are estimated by the government to be worth some $280 billion.

On the night of Dec. 20, after the lira had shed around 60% of its value against dollar in 2021 alone, Erdogan unveiled a package of measures that included multiple deposit instruments that reimburse savers in case of a weakening by the lira against hard currencies and gold prices. Asan said more than 60 billion lira ($4.5 billion) has accumulated in the new forex-indexed lira deposit accounts so far. 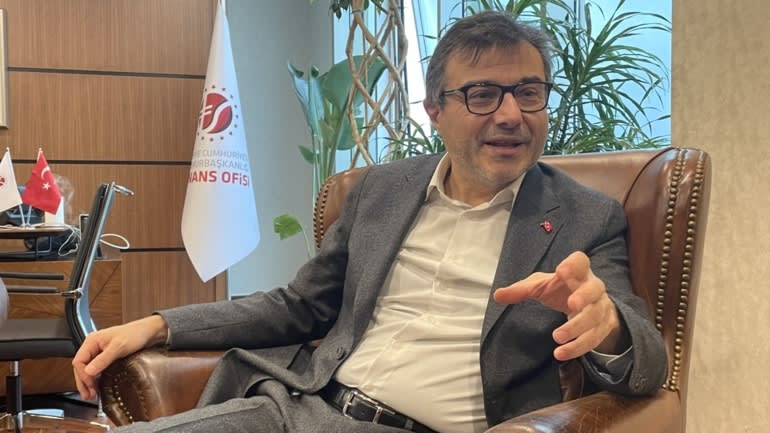 Goksel Asan, head of finance in the office of President Recep Tayyip Erdogan, speaks to Nikkei Asia on Dec. 31. (Photo by Sinan Tavsan)

Erdogan's announcement triggered a massive rally by the lira, pushing it from 18.3 to the dollar to 10.2 at one point. The Turkish currency has more recently traded at around 13.4, softening for a fifth straight day Friday. The lira closed 2021 down well over 40%, making it the worst-performing emerging-market currency.

Bank traders and economists who watched the lira surge said Erdogan's announcement was likely accompanied by multibillion-dollar forex sales by state banks via central bank reserves. But officials maintain that it was based solely on forex sales by locals who had heard the president's announcement. Data from the Turkish central bank shows that total forex deposits held by individuals and institutions, such as companies, did not decrease over a week to Dec. 23 and instead hit a record high of nearly $239 billion.

But Asan expressed satisfaction with the response to the new products.

"I personally expect that the new deposit instruments will collect 150 billion lira [$11.3 billion] to forex-indexed lira accounts in a month, while I also expect an additional $5 billion to be exchanged back to the lira from standard forex deposit accounts in the same period," he said, suggesting a sum of $16 billion at the current exchange rate.

The central bank has slashed its policy rate by a total of 5 percentage points since September, lowering the benchmark rate to 14%, even while annual inflation hit 21% in November. The move pushed investors away from the deeply negative lira deposit rates and toward parking their assets in instruments ranging from forex to gold and even cryptocurrencies.

Asan acknowledged that the lira's rapid depreciation to 18 against the dollar was a "catastrophic situation" and that lira holders tried to escape to other currencies. He called it an "urgent problem" and said it led to the new proposed financial instruments as an emergency measure.

The main purpose of the forex-indexed lira deposits is to keep individuals from buying more foreign currency, Asan explained. The fact that more than 60 billion lira flowed into the system "means that we prevented an additional close to $5 billion" from shifting to the dollar, he said.

The secondary objective, he said, was to encourage new individual investors who had opened standard foreign exchange deposit accounts during the recent currency shock to switch to the new forex-indexed lira deposit accounts. This was a tacit acknowledgement that many longtime holders of foreign currency will likely not move to the new system.

Asked about the potential cost that the government may have to shoulder through the deposit guarantee should the lira depreciate much further against the dollar, Asan said the worst-case scenario for the first three months may see a burden of 20 billion lira. But he reiterated that "the lira rate will be stabilized within weeks."

Erdogan also showed confidence in the steps Friday, saying that "with our measures, we have largely taken control of the fluctuations in forex rates and excessive price increases" -- and that "after New Year's, we believe that forex rate will stabilize at a reasonable level, like that at the beginning of this week."

Asan said: "My personal expectation is that the lira is going to stabilize somewhere quite higher than 10 lira [to the dollar] and later move in line with inflation."

If the currency holds steady for six months, depositors may not feel a need for forex-indexed instruments in the near future and "perhaps demand [for such instruments] may disappear by summer," Asan said.

Turkey's statistics office will announce consumer inflation for December on Monday. Reuters' inflation poll expects a median month-to-month rise of 9% in December, or 30.6% on a year-on-year basis -- the highest since 2003.

Asan acknowledged that December inflation will be high, owing to the sharp weakening experienced by the lira until Dec. 20.

He expects inflation to peak in March and close the year below 17%. Market analysts expect a median of close to 23% annual inflation for the next year.

Piri Reis University economics professor Erhan Aslanoglu said: "If introduced, as we are going to enter a very high-inflation period, inflation-indexed bonds can make some contribution, depending on their maturity, and they can absorb some of the demand for dollar-buying."