Your browser does not support the audio tag.

This feature is powered by text-to-speech technology. Want to see it on more articles? Give your feedback below or email [email protected]

It’s impossible to know which stocks will dominate the stock market in a decade’s time, but we can fairly confidently say which companies will not be on that list: stocks that currently top today’s market-cap ranking — namely Apple AAPL, +2.30% , Microsoft MSFT, +2.32% , Amazon.com AMZN, -0.82% , Alphabet (Google) GOOG, +0.63% and Meta Platforms (Facebook) FB, +3.26% .

That’s because it’s rare for stocks at the top of the market-cap ranking to keep their status a decade later. Not only do they usually fall out of the top 10, they also underperform the market on average over the decade.

That’s according to an analysis conducted by Research Affiliates, the investment firm headed by Robert Arnott. To show the precarious position of the market’s “top dogs,” he calculated what happened over the decade of the 1980s to the 10 largest publicly traded companies at the beginning of that 10-year period. Eight of the 10 were not on 1990’s top-10 list, and all 10 on 1980’s list underperformed the world stock market over the subsequent decade.

Arnott found that the 1980s were not unique. He reached a similar result for the top stocks of the 1990s, 2000s, and 2010s. On average, a stock on any of these lists underperformed the market over the subsequent decade. In addition, there was between a 70% and 80% chance that any given stock would not be on the comparable list one decade hence.

Arnott illustrated these top companies’ underperformance in another way as well: He constructed a hypothetical portfolio that each year owned the world’s 10-largest companies. The performance of this portfolio is plotted in the chart below. Over the 40 years from the end of 1980 through the end of 2020, this portfolio lagged a buy-and-hold by 1.8 annualized percentage points. 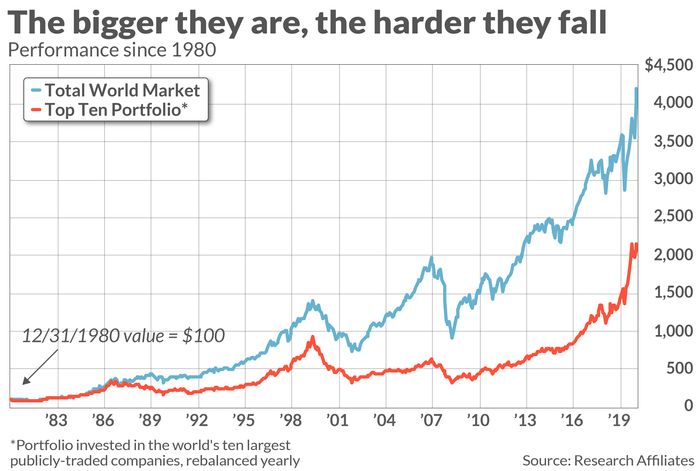 Arnott believes there are even better ways of weighting stocks in an index beyond equal weighting. His firm maintains a number of so-called fundamental indices that base a stock’s weight on fundamental characteristics such as sales, cash flow, dividends and book equity value.

But there’s another investment implication of Arnott’s data that I want to focus on: His results highlight the difficulties determining the valuation of a lopsided market.

Consider the SP 500 currently, in which just six stocks — Apple, Microsoft, Alphabet, Amazon, Tesla TSLA, +2.52% and Meta Platforms — account for 26% of the index’s total market cap. Imagine a situation in which those six are overvalued while the other 494 stocks, on balance, are more fairly valued. In that case, the valuation ratios for the SP 500 as a whole could paint a skewed picture.

This situation isn’t just hypothetical. The largest six stocks currently have an average price/earnings ratio of 62.0, according to FactSet, more than double the average across all stocks in the SP 500 of 29.1 and almost triple its median P/E ratio of 21.4.

It’s possible, therefore, that the U.S. stock market isn’t as overvalued as we would otherwise think by focusing on valuation ratios for the SP 500 as a whole.

Mark Hulbert is a regular contributor to MarketWatch. His Hulbert Ratings tracks investment newsletters that pay a flat fee to be audited. He can be reached at [email protected]

Become a smarter investor. Sign up here to get MarketWatch’s best mutual funds and ETF stories emailed to you weekly!

More: ‘When should I sell Amazon?’ These pro tips can help you dump your stock market darlings