The Dollar Index fell for the third consecutive daily session on Wednesday yet its selling was intensified. Despite the USD being on the back foot against most of its major counterparts except the JPY, the anticipated US economic data indicated positive results for the economy. The final GDP rate for Q3 came out higher than expected and reached 2.3%, while the US Consumer Confidence reading for December also exceeded market expectations and reached 115.8.

However upon the greenback’s weakening the EUR and the AUD moved notably higher against it on the day. The EUR continues to be strong during today’s early European morning. This season’s traditional low volatility is nowhere to be found so far this week, as the market seems very active trying to determine the impact of the new variant across the world. Most notably on Wednesday the Chinese city of Xi’an placed approximately 13 million residents in lockdown ordering them to stay at home and avoid unnecessary outings. Yet the risk on sentiment remains intact as major Indexes around the world ended Wednesday in positive ground. The major US stock markets moved higher for the second consecutive day confirming traders appetite for stocks in the present moment.

In addition we must note that WTI prices were higher for the second consecutive day after the US EIA weekly oil inventories indicated a drawdown of -4.715M instead of -2.750M expected. On Thursday the market moves its attention to a number of important releases with the weekly US Initial Jobless claims, the Final University of Michigan Sentiment for December and the Canadian GDP rates for October standing out.

US30Cash was on the rise for the second consecutive day and managed to approach the currently noted (R1) 35880 resistance line but did not breach it. If the upwards momentum continues then the (R2) 36180 line could come into play. Another target to the upside can also be the (R3) 36570 level which was the highest reached in 2021 and was tested back in November. If the index makes a turn to the downside then we could see the (S1) 35600 line coming into play. If the selling is extended then the (S2) 35285 could be the next level to be reached while even lower the (S3) 34955 line represent the lowest line for this analysis. The RSI indicator below our chart has ascended to the 63 level confirming the buying interest of the last sessions. standing out.

On Wednesday, the U.S. Food and Drug Administration issued an emergency use authorization (EUA) for Pfizer’s Paxlovid. Previous, official data from Pfizer’s trials displayed, Paxlovid, was 90% effective in preventing hospitalizations and deaths in patients at high risk of severe illness. The pill represents the most upgraded tool available to fight the virus and its variants. Furthermore, the pill is authorized at a rather crucial stage as the Omicron variant is surging across the world. The current circumstances could speed up the process for the pill to be authorized in other continents also.

Pfizer’s share price ended Wednesday’s session in positive territory as it gained +1.02% and closed the session trading at $59.55. Pfizer’s Paxlovid authorization by the FDA can possibly signal an increase in future revenues for the pharmaceutical company. Paxlovid may generate $18 billion in revenues next year, according to JPMorgan Chase Co. analysts. Moreover, other drugs like Merck’s Molnupiravir which also aims at reducing the risk of hospitalization or death in high risk can be authorized as an emergency in the near future.

AUD/USD moved higher and approached the (R1) 0.7225 level that was last seen during mid-December. This movement confirms the levels has been eyed by traders while its significance can be determined further if breached as it could make way for a strong bullish interest to unfold. In this case the (R2) 0.7270 level could come into play while the (R3) 0.7305 line which is the highest resistance noted for the currency pair may also become a target. If the currency pair is undertaken by a selling interest then the (S1) 0.7175 level could come into play first. Even lower the (S2) 0.7145 level which was used as both a resistance and a support previously is imminent. Our lowest and strongest support level remains the (S3) 0.7100 level that was tested various times in December but was not breached proving its solidity. The RSI indicator below our chart is running across the 66 level confirming traders bullish appetite.

Other highlights for today 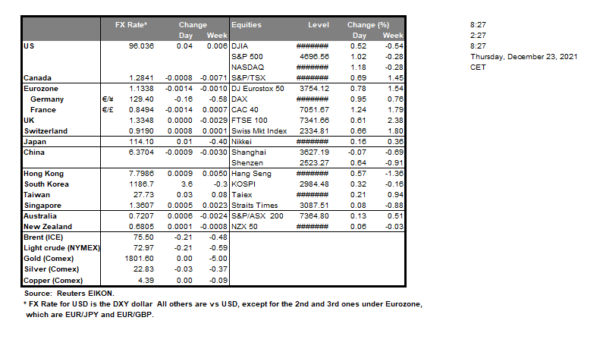 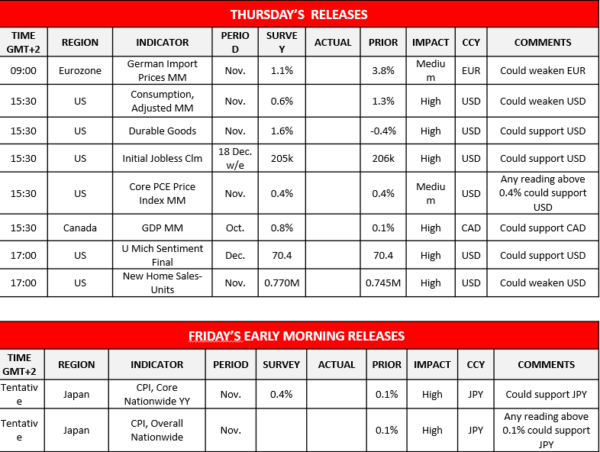