The market may be ignoring risk of Omicron shutdowns - CNN

New York (CNN Business)Wall Street is getting nervous about what will happen to the economy next year.

The big concern is whether inflation will run too hot, forcing the Federal Reserve to step in with more rate hikes to stop rising prices in their tracks.

The Dow fell more than 530 points Friday, about 1.5%, as fears grew that the Fed could potentially cause an economic slowdown by tightening too aggressively. Such concerns are global: Investors everywhere are worrying about inflation and the likelihood central banks will follow the Bank of England's lead and soon raise their own interest rates.

But what if investors are scared of the wrong bogeyman?

The rise of the Omicron variant of Covid-19 around the globe is raising the possibility that countries...or private businesses...may have to issue new lockdowns. 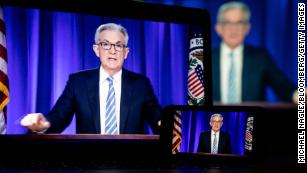 Restaurants and pubs in London are closing in response to the Omicron threat. Some Broadway shows in New York City have been canceled.

And companies ranging from Apple and Ford to ridesharing firm Lyft and investment bank Jefferies have recently announced plans to delay workers' return to the office. More businesses are likely to follow suit.

This might not be priced into the broader stock market just yet.

The SP 500 is up 23% this year and is just a little more than 1% from its record high. Investors aren't exactly running for the hills and hiding.

But there are pockets of the market that are getting hit harder than others. The tech stock heavy Nasdaq has fallen 6% from its record high, putting it closer to 10% correction status. But even after its recent drop, the Nasdaq is still up 18% in 2021.

Airlines and other leisure and hospitality stocks have fallen recently, too, an indication that investors are wary of Omicron's impact on travel. United Airlines ( UAL ) shares have plummeted more than 9% in the past week. Carnival ( CCL ), Marriott ( MAR ) and Expedia ( EXPE ) have all posted big drops lately, too.

For what it's worth, investors still seem to be more nervous about what the Fed is going to do than Covid shutting down the economy the way it did in March 2020. The fact that millions of Americans are now vaccinated and boosted may be helping.

But the spike in consumer prices is still more of a market obsession. To that end, more than 60% of those who responded to an informal Twitter poll posted by this reporter indicated that they thought inflation was the biggest risk for markets in 2022 compared to just 27% saying Omicron and Covid.