It’s been another spectacular year for equity markets as the pandemic-induced stimulus has kept the rally on Wall Street alive even as the virus threat has yet to recede. The picture has been a little more mixed in some other parts of the world like Asia, but overall, 2021 has been fantastic for most risk assets. So what were the driving forces behind these moves and can the positive trend be sustained in 2022 when most central banks have begun to withdraw stimulus and high inflation is becoming bothersome? 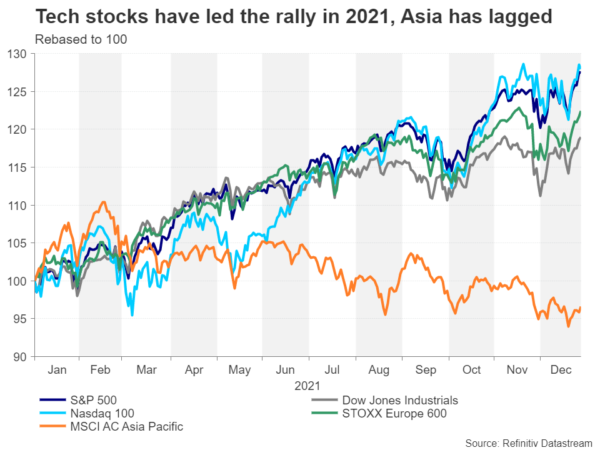 From first dose to boosters

Let’s rewind back 12 months. Covid-19 vaccines were all the rage as everyone was betting that they would bring an end to the pandemic. Those hopes were destroyed when the Delta strain came along. Investors have yet to fully make their minds up about the Omicron variant and this will likely be the biggest test for equities at the beginning of 2022.

Markets have been quick to dismiss the risks from Omicron due to all the initial findings suggesting that this new strain is not as dangerous as previous ones. Yet, these early studies also show that Omicron may be up to four times more transmissible than Delta. The White House’s chief medical advisor, Dr Anthony Fauci, best highlighted this when he said: “when you have such a high volume of new infections, it might override a real diminution in severity”.

Traders have tried to remain optimistic, hoping that vaccines will do the job in keeping the major economies relatively open through this latest wave. If the start of 2021 was marked by the race to get everyone a first dose, the final weeks of the year will surely be remembered by the race to deliver booster jabs, which have proven to provide substantial protection against the new variant.

But the problem isn’t just about whether Omicron will mean fresh lockdowns. When so many people are getting infected and having to self-isolate, then that would inevitably result in large-scale business disruptions, as was the case over the Christmas weekend in America with the airline industry. And that takes us to the other big headache of 2021 that looks set to drag into 2022: supply-chain bottlenecks.

The supply chain chaos rumbles on

When corporate America reported its Q3 earnings, there was wide-spread relief amongst investors that most companies had managed to contain the costs driven by supply and worker shortages, posting stellar quarterly results. Some firms, mainly retailers, were of course impacted more than others and their stocks therefore took a bigger hit, while others warned of more difficult quarters ahead.

Policymakers are counting on the supply constraints resolving themselves in 2022. However, there’s little sign so far that the global bottlenecks will ease up anytime soon. Omicron has complicated the picture even further. But even before that, it’s predecessor Delta was making inroads in new regions, with some Chinese cities being the latest to face snap lockdowns.

The supply-chain issues pose a two-fold risk for businesses. Not only do they hinder production and raise input costs, but the sustained price increases, if passed onto consumers, eventually lead to higher borrowing costs as well. This is probably the greatest threat for equities in 2022, particularly for Wall Street, which has been relaxed about the prospect of the Fed raising interest rates in the next few months. 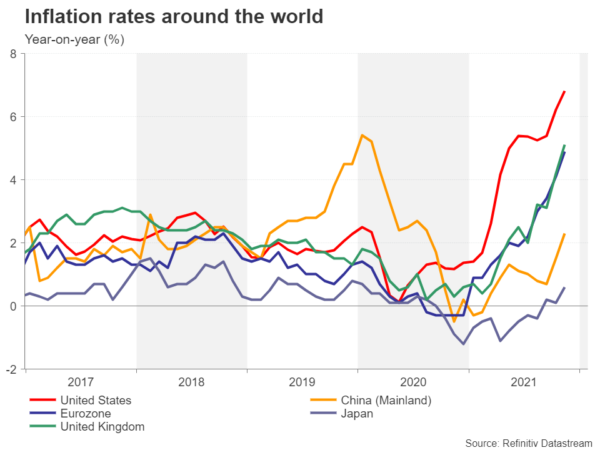 The stimulus taps are being turned off

The plentiful stimulus that was flooding the markets up until recently was shoring up stocks when negative Covid headlines struck during the pandemic. But one of the biggest turning points in 2021 was when central banks decided to step away from their extremely accommodative stance and started to wind down their pandemic-era stimulus.

With the narrative about high inflation being transitory now dead, policymakers are keen to put the brakes on spiralling prices. The Fed raised its projections for the federal funds rate in December, pencilling in three quarter basis points increases in 2022, in line with market expectations.

Are rate hikes no longer dreaded?

So why aren’t markets panicking? Wall Street’s three leading indices are on the cusp of closing the year at fresh all-time highs, including the tech-heavy Nasdaq, which had a harder time bouncing back from the November/December selloff than the SP 500 did. European stocks are a little more way off their yearly peaks but are rebounding quickly.

One reason why investors remain bullish is that financial conditions have not tightened significantly after the Fed’s hawkish pivot. The yield on 10-year Treasury notes has not scaled a new post-pandemic high since March, seesawing around 1.45% during December. Wall Street seems comfortable with that level. Moreover, it suggests markets think interest rates won’t peak very high because the Fed’s early action will succeed in curbing inflation.

Real yields in the US have also not spiked much despite the consumer price index approaching 7%. In fact, real yields have remained near historically low levels as 2021 draws to a close. Until yields start climbing substantially higher, markets will not be spooked by the Fed’s current ‘modest’ tightening plans.

If inflation does indeed level off at some point in the first half of 2022 and there are no further setbacks with the coronavirus such as more worrisome mutations, US and global equity markets would be poised to extend their gains for a fourth straight year.

The SP 500 is on the verge of cracking the 4,800 level and the next major target after that is the 5,000 milestone. However, the latest upswing might first stall around 4,810, which is a natural point for the rally to take a breather as this is close to the 200% Fibonacci extension of the September pullback.

Growth stocks are likely to thrive the most if inflation risks start to subside and financial conditions remain accommodative. Big tech names should also continue to do well, especially high-dividend paying ones. Health care, energy and communication services are a few other potential winning sectors.

Plenty of risks lurking in 2022

The Fed could of course turn more aggressive if Omicron really does turn out to be less severe than feared, and in addition, Senate Democrats give the green light to President Biden’s $1.75 trillion spending plan, which is at the moment hanging in the balance.

Looking further out into the future, the US midterm elections in November 2022 could produce some shocks as Democrats are in danger of losing both chambers of Congress if they and President Biden continue to see their popularity waning.

In the immediate horizon, however, the main focus is on the Omicron impact and how soon inflation will peak. In the worst case scenario, further supply disruptions from Covid could elevate prices even higher, adding more pressure on central banks to act, reviving fears of stagflation, which fortunately did not materialize in 2021.

Value stocks such as financials, energy and some industrials are more likely to perform better in such an environment, whereas growth stocks as well as consumer discretionary and small-cap tech companies could be riskier investments.

Growth stocks tend to have higher valuations and the tech sector is awash with astronomically high price/earnings multiples. Excluding the mega-cap tech companies that have some defensive characteristics, overvalued tech stocks are most at risk from sticky inflation that fuels a rally in long-dated yields and forces the Fed’s hand to hike more aggressively. 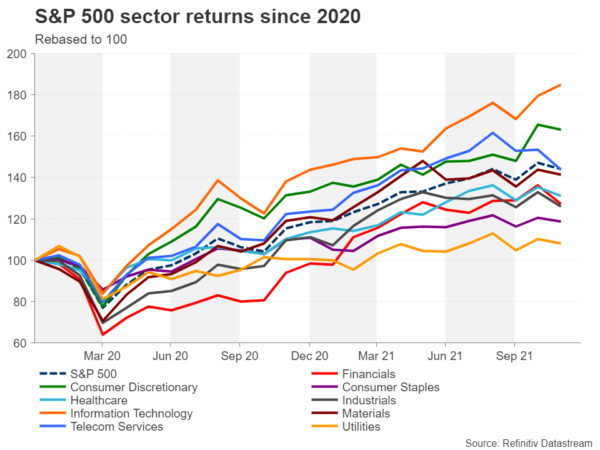 In Europe, the continent’s generally more stringent response to surging Covid cases is likely to weigh on the growth outlook for another year. However, just as it was the case in 2021, the European Central Bank’s ultra-dovish policy should keep the positive momentum going. The ECB is now alone in continuing to believe that inflation will come down on its own accord and a rate hike next year is highly improbable.

At the other end of the monetary policy spectrum, China’s central bank is on an easing path as the jump in inflation there has been more modest and manageable, and this should be supportive of equities in the region, which have been underperforming lately. China’s regulatory onslaught has been weighing on the domestic tech sector and the crackdowns could broaden in 2022. But an even bigger worry is the country’s embattled real estate sector, which is sinking in debt.

So far, authorities seem to have a grip on the fallout that was triggered by fears of property giant Evergrande defaulting on its debt. However, the property woes are far from over and could yet spark jitters for equity markets in the next 12 months.

Will buy-the-dip mentality endure in 2022?

After a very bumpy year that saw investors buying into every dip, overall financial market volatility has been dwindling during the holiday-thinned trading. Don’t let this fool you, though, into thinking that 2022 will be quieter. If anything, the coming year could be even more volatile given the unpredictability of how far inflation rises and for how long, and how soon the pandemic becomes endemic.

But if 2021 has proven anything it is that there’s not much of an alternative to stocks for investors seeking decent returns, especially now that inflation is on the rise, making low-yielding bonds even less attractive than they already are.

A lot will also be riding on how strong Q4 earnings are. The last three months of the year will probably provide the strongest indication yet as to how badly the supply shortages and labour dislocation are hurting profit margins and the extent to which the Omicron outbreak has dented companies’ earnings forecasts for the upcoming quarters.