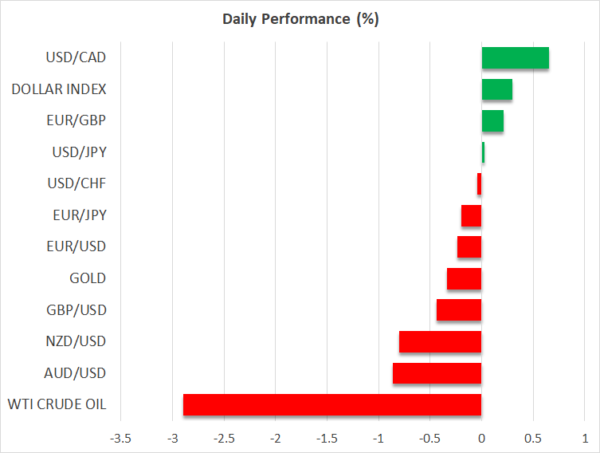 A sense of nervousness has returned to haunt financial markets. Investors are increasingly slashing their exposure to riskier assets amid concerns that the Delta outbreak will kneecap global growth, at a time when central banks are trying to take their foot off the accelerator.

One by one, different charts are telling the same story. First it was the bond market that raised the alarm, next it was the commodity currencies and crude oil that started rolling over, and then the hammer fell on Chinese and small-cap stocks. Now the pain is spilling over into quality large-cap equities, which were the last bastion of optimism.

The SP 500 lost around 1% yesterday and futures point to a similarly negative open today, without any major news. The FOMC minutes overnight didn’t reveal anything new, so it is difficult to pin the blame on that. Instead, it looks like the markets simply reached a breaking point, after weeks of souring economic data and distressing virus news.

Whether this selloff persists will likely depend on what the Fed says at next week’s Jackson Hole symposium. Concrete signals that a tapering move is on the table for September could provide the bears with more fuel. That said, the bigger picture remains promising. Investors will ultimately remember that equities are still the only play that provides any real returns, especially with Congress stepping up its fiscal game.

It wasn’t just stock markets that suffered, though. Crude oil also cracked below crucial levels, alongside the entire commodity FX space. Even some solid jobs numbers out of Australia overnight were unable to stop the onslaught.

The only sanctuary was the US dollar. Beyond its role as the world’s reserve asset, the dollar could also be gaining traction on hopes the American economy will weather the Delta storm better than its rivals, thanks to relentless fiscal support.

Meanwhile, the Fed remains committed to normalization. Minutes from the July FOMC meeting showed ‘most’ officials think tapering can begin this year, and this was before another stellar jobs report was released. Inflation is hot, the economy is now bigger than it was before the crisis, and the labor market could be near full employment by year-end.

The main risk is the nation’s relatively low vaccination rate. That makes America more susceptible to another outbreak than Europe, especially if a more infectious or lethal variant comes along. Even so, this doesn’t always translate into a direct economic hit as US authorities are typically much more hesitant to enact social restrictions.

Gold may be a shiny metal but its ability to glitter during periods of turmoil has all but evaporated since the pandemic hit, with the dollar replacing it as the market’s favorite defensive instrument. And since the dollar and bullion usually move in opposite directions, gold has started behaving like a risky asset.

This dynamic is on full display today, with gold unable to capitalize on all the risk aversion or falling Treasury yields. Instead, it is being hammered lower by a resurgent dollar.

Finally, another casualty of the souring mood has been sterling. There hasn’t been any massive news out of the UK, so it seems like the pound has been caught in the broader storm of risk aversion.