Stock-market investors are banking on this sector in the COVID recovery, while JPMorgan steps up its ETF game - MarketWatch

Hello, again: Quick! What’s the best performing sector among the SP 500’s SPX, +0.21% 11 this week? It’s financials (with materials right behind). Incidentally, financials are also the best performing sector so far in August, up over 5%, with Morgan Stanley MS, +0.60% , JPMorgan Chase JPM, +0.26% and Goldman Sachs Group GS, +0.06% helping to drive up values in exchange-traded funds that offer exposure to the sector.

Investors are betting heavily on the banking sector’s rebound in the economic recovery from COVID-19 and that is showing up in ETF moves this week with the Invesco KBW Bank ETF and SPDR SP Regional Banking ETF. Check out ETF Wraps table of top performers this week below. The outperformance by financial ETFs come even as interest rates haven’t necessarily cooperated.

Rising interest rates are good for bank profitability but currently the 10-year Treasury note TMUBMUSD10Y, 1.374% , used to price everything from mortgages to car loans, is hanging around 1.35%. Banks borrow using short-term debt and lend on a longer-term basis. Longer-dated rates are expected to eventually head higher and the economy is also expected to benefit from a fuller recovery if the delta variant doesn’t derail that.

We’ll also talk a little about the playbook for new infrastructure legislation, bets on small-caps versus large and the power move by JPMorgan Chase into ETFs.

As per usual, send tips, or feedback, and find me on Twitter at @mdecambre to tell me what we need to be jumping on. Sign up here for ETF Wrap.

A recent announcement by JPMorgan Chase that it would convert a chunk, some $10 billion, of its actively managed mutual funds into ETFs is rippling through the fund market. Todd Rosenbluth, head of ETF and mutual fund research at CFRA says that JPMorgan is currently ranked No. 9 as of 2020 (it is currently No. 7), but could be near the top of ETF providers in the coming half decade.

“JPMorgan could be a top 5 provider in the next five years,” Rosenbluth told ETF Wrap.

The move comes as fund providers are increasingly restructuring mutual funds into ETFs because of the increased interest in the benefits of the ETF wrapper, including tax-efficiencies and transparency.

Rosenbluth notes, however, that JPMorgan’s tactic is different from competitors, like American Century and Fidelity, who recently launched semi-transparent ETFs under the same name as popular mutual funds.

Overall, the CFRA analyst says that actively managed ETFs have been drawing a lot of interest, pulling in $38 billion year-to-date through Aug. 10, according to CFRA data.

The good and the bad

Visuals of the week 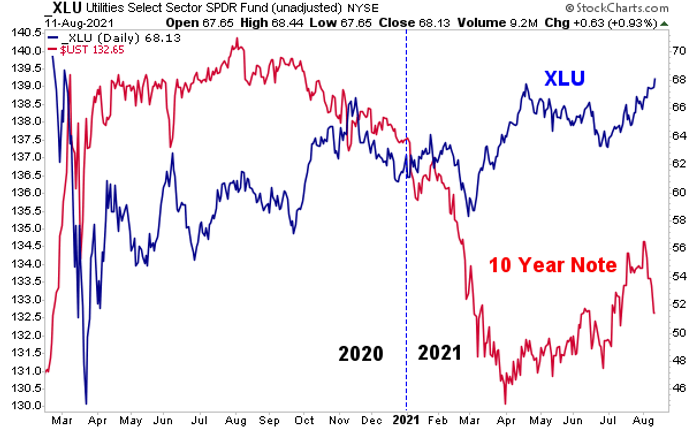 Instinet’s Frank Cappelleri, a technical analyst, notes that the Utilities Select Sector SPDR Fund XLU, +0.19% hit a 52-week high on Wednesday. However, the technician notes that Treasury yields, although elevated of late, haven’t necessarily confirmed the move in utilities, which historically have tended to rise along with fixed income assets like the benchmark 10-year Treasury TMUBMUSD10Y, 1.374% , for example.

“The XLU historically has been a bond proxy, of course. But its correlation to the 10 Year Note largely has fallen apart in 2021. Whether we blame the Fed for this or not, we shouldn’t ignore the move just because rates aren’t confirming it,” Cappelleri writes.

We’ll have to see how that plays out if yields pick up a little steam.

Jefferies’ equity strategist Steven DeSanctis thinks that there’s further value in small-caps, even as inflows into small-cap ETFs have cooled in recent weeks. Here’s his thinking on the subject in a research note dated Wednesday.

“Inflows to Small-cap ETFs may have peaked in mid March and affected performance…But we think institutional investors are interested in size segment. For every dollar coming into Small, 45 cents goes to passive, creates tailwind for smaller Smallcaps,” he writes.

DeSanctis and his crew see small outperforming large-caps by 5.50 percentage points in the next year.

After the U.S. Senate passed a roughly $1 trillion infrastructure package with broad bipartisan support Tuesday, the immediate question has been: do ETFs that have been used to bet on infrastructure plays still have room to run?

A popular exchange-traded fund that offers exposure to stocks that would likely benefit from an infrastructure bill, the Global X U.S. Infrastructure Development ETF PAVE, +0.04% has climbed 3.7% so far this week and 5.7% within the past 30 days, FactSet data show.

Other areas, like renewable energy and electric vehicles haven’t seen a recent pick up. Invesco Solar ETF TAN, -0.70% was down 1.1% on the week, while Global X Autonomous Electric Vehicles ETF DRIV, -0.15% was virtually flat so far this week. TAN, referring to the solar ETF’s ticker symbol, is down 17% year-to-date, while the EV ETF is up 21% so far in 2021.

There is still some question about how quickly the House will act on the bill though.

Ally Invest’s Lindsey Bell says that there may still be upside if the bill is ultimately signed by President Joe Biden.

“Sector ETFs that have cooled in recent months on the back on growth uncertainty, related to the industrials, materials, construction equipment, semiconductors, and electric vehicles arenas could see a boost as the bill gets closer to President Biden’s desk,” she wrote.