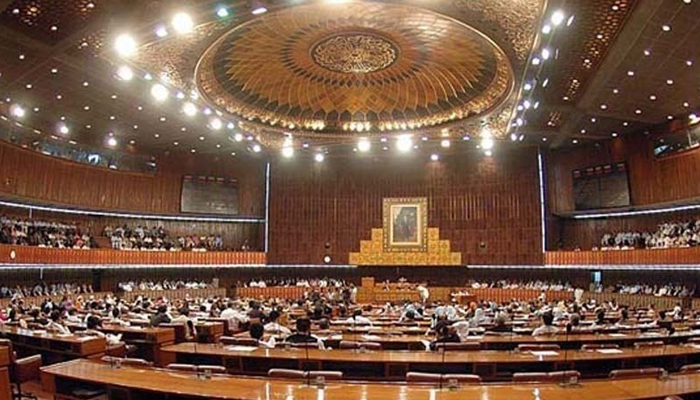 A view of the Senate during a session of the upper house. — APP/File

ISLAMABAD: The Senate on Tuesday gave five recommendations on the Money Bill (Finance (Supplementary) Bill, 2021) to the National Assembly seeking amendments in its various clauses.

The recommendations were reported by the Senate Standing Committee on Finance, Revenue and Economic Affairs.

Chairman of the Senate Standing Committee Senator Talha Mehmood presented the report of the committee.

As per the report, the Senate opposed a budget proposal to publicly disclose asset declarations filed by politically exposed persons, civil servants and their spouses, except the armed forces.

The Senate also recommended no tax on “naan” and “bread”, including the kind prepared in bakeries.

The upper house recommended no tax on yogurt, butter, desi ghee and milk.

The Senate also opposed the proposal of binding the corporate sector to make digital payments  on the plea that such payments could not be enforced.

While presenting the report, Senator Talha Mehmood pointed out that the report was finalised during five consecutive meetings of the committee as the committee members read the Bill clause by clause and recommended proposals unanimously.

The chairman of the committee specially thanked members of the committee, and officials of various departments including Federal Board of Revenue (FBR), Finance Division, and State Bank of Pakistan (SBP) for their participation in a lengthy debate and process.

He feared a new wave of inflation would come as a result of the supplementary finance bill.

Senator Mohsin Aziz, who is also member of the standing committee on finance, said the committee read the bill clause by clause in all the five meetings.

He lamented that during the committee's proceedings, the atmosphere was friendly but here in the house, Senator Talha Mehmood was speaking only for political gains.

Aziz said the Opposition, which is criticising the government’s programme with the IMF now, had already been part of the programme  in the past.

He said the committee unanimously rejected additional tax on milk and yogurt.

He further said new taxes on the pharma sector were totally refundable and adjustable and that this would not affect the prices of the medicines.