Saga, From the Crown Shy Team, to Open High Above the Financial District - The New York Times

A California ramen chain comes to the East Village, a beer garden for Oceana in Midtown, and more news. 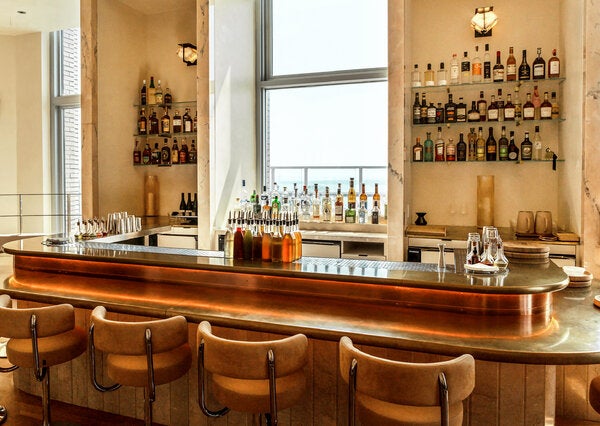 The celebrated financial district restaurant Crown Shy, which reopened at 100 percent capacity in June, will grow by four stories by summer’s end. The restaurant has taken over four floors (62, 63, 64 and 66) at the top of 70 Pine Street, an Art Deco building. The spaces were used in the past by A.I.G. executives for board meetings, private dining and contract-signing ceremonies. They have been converted into this restaurant featuring experiential tasting menus ($245 per person, including tax and a welcome beverage); an elegant, oval cocktail bar called Overstory; and, at the very top, a private dining room. There are a total of 12 terraces with breathtaking views in every direction. Diners will get to see every inch of Saga, including the kitchen, as they are guided from room to room for each course of the executive chef James Kent’s meal. “Menus are conversations,” said Jeff Katz, the general manager and co-owner. “We’re trying to eliminate the standard come-into-the-restaurant, sit-at-the-table and start-the-meal-in-20-minutes format.” Customers need not dine at Saga to belly up to the brass-and-marble bar at the 24-seat Overstory, which is reached by a dramatic flight of stairs. It opens Aug. 24, with the private dining room opening later. ROBERT SIMONSON

This ramen chain known for speedy service and based in San Francisco since 2017, with outlets in several California cities, has opened a location in New York. It specializes in Hakata-style tonkotsu ramen with rich, creamy pork broth and thin noodles. A chicken version, paitan, is also served, as are a few variations that ramp up the spices or are vegetarian. Japanese appetizers are available, including edamame, gyoza, karaage and takoyaki. The restaurant, which is spacious and does not take reservations, has an outdoor patio.

Oceana, the Midtown seafood restaurant, is setting up an outdoor beer garden in the broad passageway behind the restaurant that runs between West 49th to West 48th Streets. At picnic tables and high tops, all sheltered under umbrellas, up to 125 guests can order four beers on tap, wines by the glass and seafood items like oysters, peel-and-eat shrimp, a shrimp roll, pretzels and dips. It will be open Mondays through Fridays, weather permitting. (Opens Thursday)

Chef’s Dinner Series, an organization that has hosted dinners for over eight years, is often themed, with guest chefs around Manhattan. For the first in a series of dinners that revisit New York’s great restaurants, it has booked the chef and restaurateur David Waltuck. He owned Chanterelle with his wife, Karen, for 30 years, first in SoHo starting in 1979, then in TriBeCa; it closed in 2009. The dinner was originally scheduled for March 2020, but canceled because of the pandemic. It will now be held on Sept. 9 at 6:30 p.m. at Chef’s Dinner Table, 132 Mulberry Street (Hester Street), the organization’s new permanent home. Tickets are $350 each, $295 for repeat patrons. Since attendance is limited to 24, there may be another Chanterelle dinner on Sept. 8, if the Sept. 9 dinner sells out. Subsequent plans for the series will involve the restaurants the Harrison and Graffiti.

Nimbus, a shared commercial kitchen and event space on the Lower East Side, will open for dinner to vaccinated customers next week. To kick things off, it is holding an unusual tasting dinner: three kinds of wings from Morgan’s Brooklyn Barbecue, followed by three pizzas each from Di Fara Pizza and Roberta’s, and then three doughnuts from Kado Patisiri. Three beers from Talea are included, and proof of vaccination will be required.