Primary care has been under stress for years. It’s a medical field with high demands and relatively low incomes, at least among doctors.

When COVID-19 arrived, those practices took a huge hit. Despite measures to make up for lost revenue, many are still struggling.

On a recent morning, Amy Jewitt, of Hadley, brought her 2-month-old baby, Summer, for a physical with physician assistant Sarah Vacca.

“Let me see you on your belly,” Vacca says to Summer, setting her on the exam table, over a few light gurgles. “Any diaper rashes?” Vacca asks Jewitt. 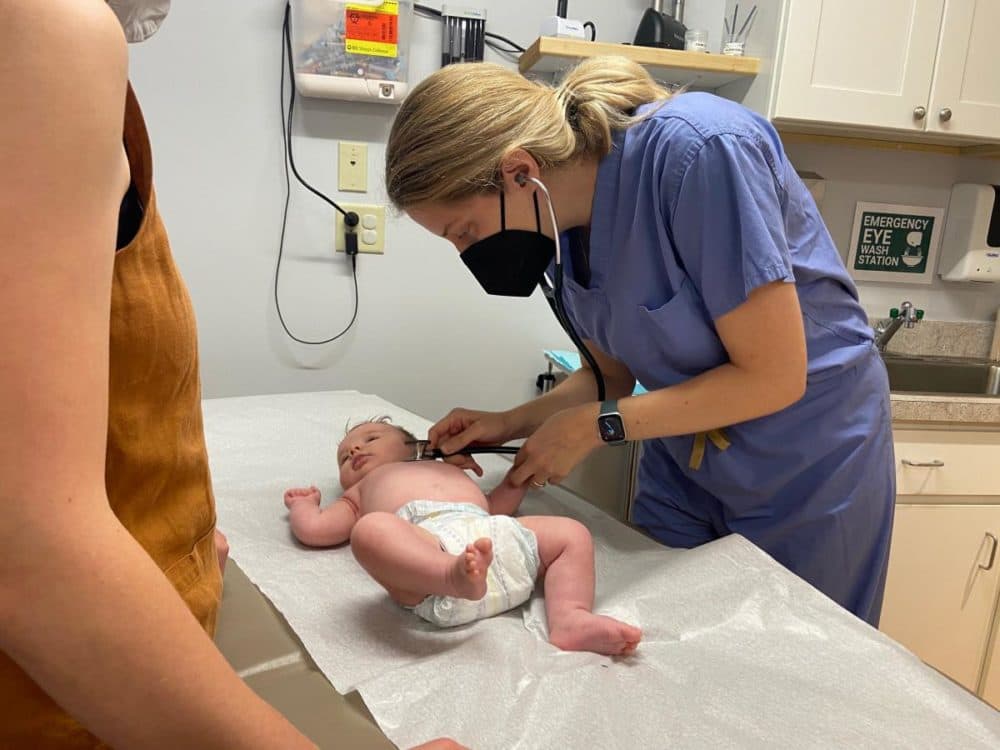 This is one of the only times Jewitt has come into the office since the pandemic began. Most of her appointments have been on video.

“Just being in a space where a lot of sick people come is worrying,” Jewitt says, “especially with such a little one.”

For the past year and a half, many patients have been avoiding the doctor’s office — in varying waves.

“It was terrifying. I really thought I was going to lose my practice,” says Dr. Kate Atkinson, who runs primary care offices in Northampton and Amherst.

Early in the pandemic, when patient visits dropped off dramatically, Atkinson’s income dried up. So she laid off some staffers, starting with those who wanted to reduce hours, and quickly ramped up televisits.

In March 2020, Gov. Charlie Baker ordered insurers to reimburse telehealth at the same rate as office visits and to waive those copays, “which for Massachusetts was a godsend,” explains Atkinson. “I mean, it really saved us. People actually wanted to keep their appointments.”

Atkinson says she got a $520,000 business loan — since forgiven — from COVID relief legislation. That helped for about a year.

“The problem for us financially has really just been recent,” she says.

'We Have To Think Twice Before Ordering Supplies'

Although in-person visits are up since the early days of COVID, many patients want to stick with telemedicine. But some insurance companies have cut back on reimbursement for telehealth.

Atkinson has also noticed that more of her patients have publicly funded insurance plans — such as MassHealth, the Medicaid program in Massachusetts — which typically pay less to doctors.

“We worry about how we're going to be able to keep plugging ahead,” she says. “We have to think twice before ordering supplies.”

Observers on a state and national level are worried, too.

The data is sparse, but national surveys from the Primary Care Collaborative, an advocacy and research group, show high burnout and precarious finances among primary care doctors.

“The pivot to remote care did not make up for the revenue that primary care lost,” says Ann Greiner, president and CEO of the collaborative. “The field is still analyzing the data to understand what the implications are.”

The Center for Primary Care at Harvard University estimates private practices lost about $15 billion in 2020.

Many have rebounded through telemedicine and federal assistance, but some gave up.

'The Practice Has Closed Permanently'

Primary Care Associates in Springfield used to care for adults and geriatric patients. But after the pandemic began, the office couldn’t make up the lost income, according to nurse practitioner Julyvette Rodriguez, who worked there. The practice shut down in November.

Now when former patients call, they get a recording that says, “The practice has closed permanently,” with no other information.

“I think you're going to see some real holes develop across the nation where access becomes very difficult,” says Dr. Robert Phillips, executive director of the Center for Professionalism and Value in Health Care of the American Board of Family Medicine.

Phillips oversees a national registry of 800 rural primary care offices. He says patient visits declined by about 40% in spring 2020 and haven’t totally recovered.

“That means that most practices remain financially underwater,” he says.

And, increasingly, primary care practices are being acquired by larger health systems, including the one Phillips works for in Northern Virginia, now owned by Inova.

“It was basically a survival issue for us,” Phillips says. “We were struggling before the pandemic, but when the pandemic hit, it was a saving throw.”

From the perspective of doctors and patients, Phillips says when private practices lose their independence, there is less flexibility in how the office delivers care.

“Like my patients have a more difficult time scheduling appointments with me because the health system just wants to fill slots,” Phillips says. “And so it's disrupted relationships in some important ways.”

Atkinson, who once worked for a large health system, is hell-bent on avoiding that fate.

“I think we take much better care of patients and staff and each other, and we bring dogs and babies to work,” she says. “I don't want to go back to a corporate model. No, thank you.”

'You Left Unprotected An Infrastructure That Was Critical'

But Atkinson is concerned about the future of her practice, including the emotional strain on staff during the pandemic.

“At the beginning, everybody was so sweet and appreciative and, ‘Yay, health care providers!’ ” she says. “And then it got to the point where people were just calling and yelling at my staff because they were just so stressed and worried.”

“I think that's taken the biggest toll from COVID,” Atkinson adds, “just dealing with the stress of people who are demanding more than we're able to provide.”

Phillips is frustrated the federal government did not set aside more COVID-relief money to shore up primary care, beyond business loans and help for federally qualified health centers.

“You left unprotected an infrastructure that was critical and that is very hard to get back,” he says. “And now I fear that this delta surge is actually going to compound that.”

Phillips is part of an effort pushing federal health officials to focus more on primary care, but he says the process is slow.

Over the long term, some doctors want different payment models, outside the current fee-for-service system, so they don’t have to rely on the sheer number of office visits for their livelihood.

The Center for Primary Care wants to move Massachusetts toward what's called “global payment,” in which health plans allot a certain amount of money per patient, no matter how often they see the doctor. That could protect practices from sudden income loss during a pandemic.

But in the short term, many worry that physicians are fleeing primary care at a time when it’s already hard to find a doctor.

Atkinson’s practice has been full for years. She says the only way to get on her list is to marry an existing patient — or be born to one.

This story is a production of the New England News Collaborative and originally aired on New England Public Media.