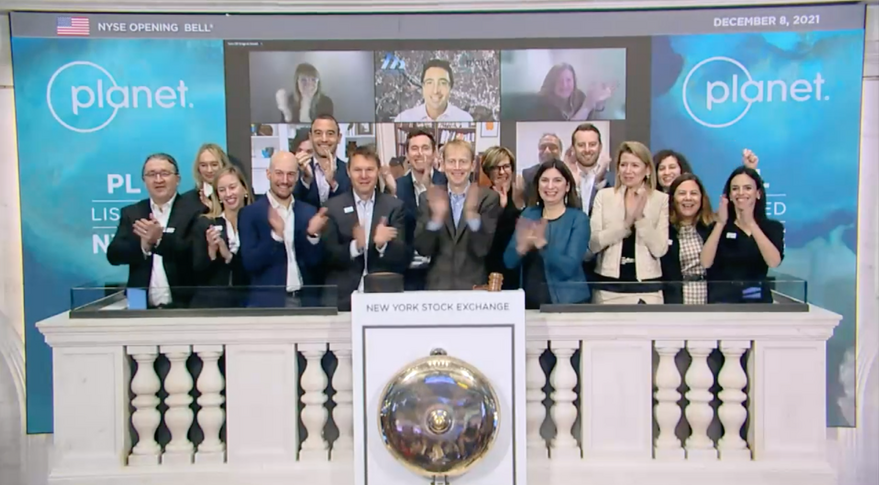 Shares in San Francisco-based Planet Labs Public Benefit Corp. closed up 5 percent to $11.35 on its first day of public trading.

With roughly $590 million from the merger and private investment in public equity, Planet is preparing to invest in sales, marketing and software as it seeks to bolster its revenue and customer base. Planet reported $113 million in 2021 revenues for its fiscal year ended Jan. 31 and currently serves about 700 customers.

Over time, Planet intends to grow that customer base from 700 “to 7,000, 70,000, 7 million,” Robbie Schingler, Planet chief strategy officer, told SpaceNews. “That’s the opportunity for the Earth-observation community, not just Planet.”

Still, with about 200 Earth-imaging satellites, Planet plays an important role in the Earth-observation sector. The company founded in a garage in Cupertino, California in 2010, now employs about 700 people and captures daily, global imagery of Earth’s land mass. Rather than selling raw imagery, Planet relies on cloud computing and machine learning to create data products it sells through subscriptions.

Planet’s journey from startup to initial public offering took about twice as long as its founders expected, Schingler said. Along the way, the company, now based in San Francisco acquired BlackBridge, Terra Bella, Boundless Spatial and VanderSat.

By establishing itself as a Public Benefit Corp., Planet is formally adopting the vision of its founders to work toward “a more sustainable, secure and prosperous world,” Schingler said. When making major decisions, Planet’s board and directors will take that mission into consideration, he added.

At the same time, Planet intends to profit financially.

Will Marshall, Planet co-founder and CEO, estimated that the company is having “about one percent of the impact that it can, both commercially as well as the impact for the planet,” Schingler said. With additional funding and people, Planet can accelerate its effort to create “a more prosperous world, where the global economy works for people and the planet, not the other way around,” Schingler said.

In addition to selling its own products and services, Planet is encouraging entrepreneurs to tap into its imagery and data streams.

“There’s a huge amount of new opportunities for entrepreneurs to be building sense-making application not just for scientists and not just for the intelligence community, but for communities, for countries that don’t have their own satellites and for just about every vertical market that exists,” Schingler said.