Omicron and the Fed might finally kill this bull market - CNN

These latest coronavirus concerns have traders wondering if this is finally the end of the long running bull market. Comments from Federal Reserve chair Jerome Powell about inflation weren't helping either.

The Dow fell more than 600 points in midday trading Tuesday.

The CNN Business Fear Greed Index, which measures seven indicators of sentiment, has plunged back into Fear territory in the past few days and is not far from Extreme Fear levels. Just a week ago, the index was showing signs of Greed.

All of a sudden, investors are once again worried about the virus — and whether it will derail the economic recovery and change plans the Federal Reserve has to start winding down its stimulus programs.

"The variant is a bigger culprit for the sell-off than Powell," said James Ragan, director of wealth management research at D.A. Davidson. "Given the fear that Omicron could slow spending during the holiday season, that makes investors nervous."

Still, investors need to keep in mind that even with the recent bout of volatility, Wall Street is nonetheless having another incredible year.

The SP 500 is up nearly 25%. The Nasdaq has gained more than 20% too. Investors are flocking to the perceived safety of mega techs such as Apple ( AAPL ), Microsoft ( MSFT ) and Google owner Alphabet ( GOOGL ).

Will Omicron derail a year-end rally?

What's more, December is often one of the best months of the year for stocks. Consumers are shopping for the holidays, and businesses are spending what's left in their annual corporate budgets.

That usually leads to healthy earnings in the fourth quarter — and investors often try to get ahead of that by loading up on stocks before companies report results in January and February.

"This is usually a great time for the market, but the variant has thrown a curve ball and things are in flux right now," said Jimmy Chang, chief investment officer of the Rockefeller Global Family Office. "There could be a relief rally at the end of the year but we're in a holding pattern right now."

So will concerns about the Omicron variant upset what is usually a strong holiday rally? The problem is that experts still aren't sure how serious this will be, although some hope it will prove to be a fleeting concern.

"The path of the virus still matters. But that said, the base case is this proves to be a limited disruption," said Eric Winograd, senior economist at AllianceBernstein.

"The hope is we don't go back to the shutdowns of March 2020. We have learned as a society to live with the virus and that has made the market and economy more resilient," Winograd added. "I don't expect the variant will undo the progress that has been done."

But investors have other things to fret about, namely the Fed's evolving view on inflation.

Powell said in testimony on Capitol Hill Tuesday that it's time to "retire" the word "transitory" when it comes to describing inflation. He also suggested the Fed could speed up plans to pull back on — or taper — the bond purchases that have helped keep long-term rates low.

That helped fuel Tuesday's stock sell off. Investors are interpreting Powell's comments as a sign that the Fed may look to more aggressively raise interest rates at some point next year, even as concerns about Covid remain.

It's almost like a repeat of the famous "taper tantrum" that roiled markets nearly a decade ago when then Fed Chair Ben Bernanke was getting ready to pull back on the post-Great Recession stimulus.

Chang said the Fed's stance could be less supportive for the market overall, and particularly for meme stocks such as GameStop and AMC that have skyrocketed in part due to the Fed slashing rates to zero in 2020. 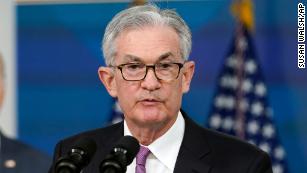 In other words, investors are now growing increasingly nervous that the Fed will pull away the proverbial punch bowl just as the economy begins to slow down. There are no more Covid stimulus checks on the horizon from Congress either.

"During the last two years there has been unprecedented fiscal support, and that isn't going to be repeated and monetary support is also going away," Winograd said.

With that in mind, he thinks economic growth should revert to a more normal rate of around 2% annually, and following several strong years of stock performance, investors haven't priced that in yet.

"This slowdown could make it a more challenging market," Winograd said. "You don't have to go out on too far of a limb to predict that stocks won't go up another 25% next year."