Bond attorney Harriet Welch, one of the founders of the 10-year-old Los Angeles chapter of Women in Public Finance, began her legal career just after a lawsuit opened the door for women at Wall Street law firms.

Law firms were hiring women in droves in 1978 when Welch graduated from Catholic University School of Law in Washington, D.C., because one firm had been sued for discrimination.

“I got into my job at Mudge, Rose Guthrie Alexander in New York, because a woman at a different law firm had sued and won,” Welch said. “And then all of a sudden every Wall Street firm started hiring women.” 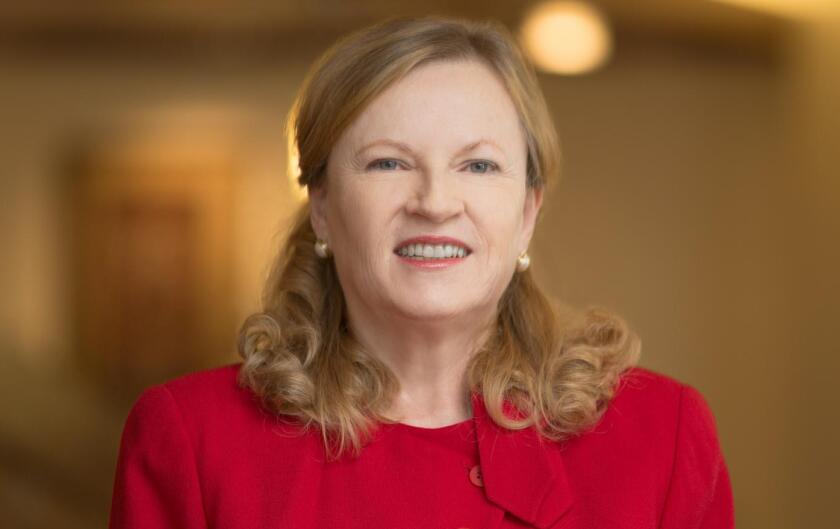 Harriet Welch described as a "force of nature," by a colleague, plans to retire in January.

Welch, who now heads the California Public Finance practice in Los Angeles for global law firm Squire Patton Boggs, plans to retire in January. While originally expecting to work as a corporate lawyer, Welch said, she found her niche working primarily on private placements for non-profits, universities and independent schools as her career evolved.

Welch earned a bachelor’s degree in communications from Loyola University in 1975, intending to become a television newscaster, but after working briefly for a New Orleans television station, she made the switch from journalism to law.

"I found [television journalism] superficial," Welch said of her decision to swerve to law.

Given her lower middle-class background, Welch said she was naïve about the challenges women faced in the legal industry when she embarked on a career in the profession. She never considered the additional challenges she might face in ascending to partner.

Thanks to equal rights lawsuits, Welch said, her hiring class at Mudge was comprised of 14 men and 14 women. The challenges were steeper in the 1950s and 1960s when law firms and judges refused to hire women.

Harvard Law School did not admit women until 1950, according to a Law Crossing article. “Women never constituted more than 10% of law students until 1973, when the need to fill law school seats during the Vietnam War and Title IX of the Education Amendments of 1972 barring sex discrimination in schools receiving federal funds fully opened law schools to women."

Some women who later made names for themselves were stymied when they first entered the profession. After graduating third in her Stanford class in 1952, Supreme Court Justice Sandra Day O'Connor was offered a job as legal secretary by one of San Francisco's leading firms. When Supreme Court Justice Ruth Bader Ginsburg graduated first in her class from Columbia in 1959, she could not obtain a clerkship with the Second Circuit Court of Appeals in New York.

“I feel humbled and grateful and remarkably lucky,” Welch said. “What do they say, ‘sometimes it’s better to be lucky than good.”

Welch earned a partnership in the municipal bond and corporate group while with Finley, Kumble, Wagner, Heine, Underberg, Manley, Myerson Casey in New York in the mid-1980s. She moved to Squire in 2003 from Arter Hadden where she was a managing partner and head of public finance in California.

Monika Suarez, managing director of public finance, nonprofit and affordable housing finance at Western Alliance Bank, credits Welch with helping her transition from working for the Los Angeles County Metropolitan Transportation Authority back to the private sector. Suarez had worked as a banker and Moody's Investors Service analyst earlier in her career.

“She introduced me to a lot of advisors and underwriters," said Suarez, adding that Welch also piqued her interest in working on private placements.

“I met her because someone had forwarded an invitation to the gathering Welch had planned to have,” Suarez said. “I was on the younger side, so I was willing to do whatever was needed to help out. I collected lunch orders.”

That meeting would result in the launch of the Los Angeles chapter of Women in Public Finance in 2011, with Los Angeles debt manager Natalie Brill; Carmen Vargas, a Barclays director; and Lisa Smith, a managing director of public finance at MUFG as the other founders.

"It was easier [to network] when I worked in New York City, because the city is more condensed and you would often bump into other public finance lawyers or bankers just out at lunch," Welch said.

She’s a tough act to follow, said Nathan Treu, the partner at Squire Patton Boggs, who will take on many of Welch’s clients. “I have worked with her for over six years,” Treu said. “Every time she speaks, I learn something. She is a force of nature.”

Welch has been generous in introducing Treu to clients. “It’s my lifetime ambition to create the kind of practice that Harriet did,” he said.

Though Welch believes law firms need to rethink their focus on billable hours, she admits to requiring long hours of her associates.

“I am guilty of that,” Welch said in acknowledging her profession often requires lawyers log astronomical hours. “I have been a managing partner. We wanted stuff done and we wanted it done now.”

Amid the COVID-19 pandemic, however, she has learned to be flexible.

“I had a child and was a single mom,” Welch said. She doesn't necessarily expect other women to juggle work and career in the manner she did, but she has counseled many on how to create a work-life balance.

The most disruptive force affecting the industry today, she says, is not technology or green bonds, but the pandemic.

“It is hard to come together physically,” Welch said. “Even though it was once a year, the Bond Buyer’s California Public Finance conference, allowed us to come together.”

Though the pandemic has forced many classes online at California universities, the schools she works with are still thriving.

“We thought some would close their doors, but that hasn’t happened,” she said.

If one thing characterizes Welch’s work style, it is “there are no dumb questions,” which has enabled her to protect clients from taking on unnecessary risks as financing methods are created.

She recalled when interest rate swaps came into vogue before the 2008 crash. “I wasn’t afraid to ask the underwriters to explain all of the variables involved,” she said.

A recent deal she is proud of is a lease-back deal involving St. Francis College, a private college in Brooklyn Heights, New York. The college sold its existing property and outdated building in order to build a facility better suited to today’s students.

She counsels her clients to consider the value of the land they own. The spike in property prices in Brooklyn allowed St. Francis College to build new facilities on a different site without taking on an onerous amount of debt. Another long-time client is Pepperdine University in Malibu, once a small private Catholic college that has grown over time to become internationally known — and some of that growth came from Welch's explaining the value of using tax-exempt debt.

Though Welch’s current practice focuses on higher education and non-profits, she has also worked as bond counsel for the California Educational Facilities Authority, the California Municipal Finance Authority, Los Angeles city and county, the city of Oakland and the State Public Works Board.

Welch has reassured her colleagues and clients that she will only be a phone call away, even after she retires.

“She won’t be able to just turn off her phone and disappear," Suarez said. "That is the hallmark of a successful career in that you are recognized as an expert and resource for people in your industry.”

For Welch’s part, she doesn’t plan to have the non-retirement-retirement that Brill and Bond Attorney Lisa Greer Quateman have had, where they are now serving on corporate boards. Brill retired in November 2020 and Quateman in July 2020.

“I plan to write trashy romance novels,” said Welch, who is a member of the Romance Writers of America.

“I will miss her,” Treu said. “I want to respect that she’s retired, but she said to call and email me anytime.”

“I think I have absorbed her style and knowledge,” Treu said. “I will never be her. She is a phenomenal attorney and a wonderful person. I am proud to call her a colleague and a friend.”