TOKYO -- Indonesia's government is under mounting pressure to resolve the financial crisis at the nation's flagship airline, which faces an existential threat from COVID-19 after years of chaotic management and weak earnings.

Analysts say Garuda Indonesia may need at least $1.3 billion to $3 billion in fresh capital to survive. But with the government, its largest shareholder, reluctant to stump up the money, and uncertainties over debt negotiations, there is still no indication of how the company can be saved -- two months on from its default on $500 million of Islamic sukuk bonds.

"If you are a creditor or a leasing company, Garuda is at the top of your list of those you are most concerned about," said one longtime aviation industry analyst. "Not because it is the only airline that has issues, but because there is so much uncertainty and not much communication, disclosure and responsiveness from Garuda for so long."

Garuda disclosed in March that it had $4.6 billion in current liabilities -- financial obligations coming due, typically within a year -- and just $485 million in liquid assets. The sukuk is only the tip of the iceberg. Nearly 40% of the near-term obligations are owed to leasing companies, amounting to $1.7 billion. 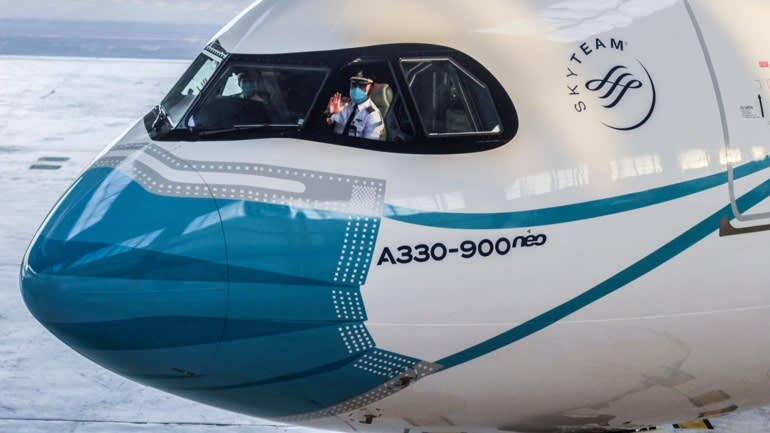 With bad news piling up, "the employees and pilots were quite worried about the continuation of Garuda's business."   © Reuters

The airline requires at least "3 to 5 trillion rupiah ($210 million to $350 million) to keep its operations going at a greatly reduced scale for less than one year," and "more than 20 trillion rupiah" to get back on track, said Ziva Narendra, CEO of consultancy Aviatory Indonesia. Alvin Lie, an independent aviation expert, thinks the amount needed is around 40 trillion rupiah.

"What is clear is that without a fresh cash injection, it will be difficult for Garuda to survive," Lie said.

Garuda has been trying to restructure its debt through negotiations with creditors and lessors, with mixed results. 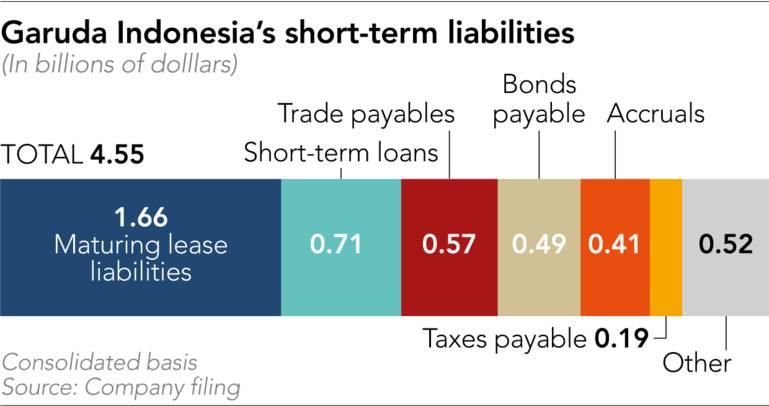 Fellow state-owned enterprises, including oil company Pertamina and airport management companies Angkasa Pura I and II, extended some payment schedules in December. Garuda has also been able to settle a dispute with Dublin-based aircraft leasing company AerCap Ireland out of court, with the Irish company dropping its bankruptcy lawsuit in exchange for the early return of nine aircraft.

But Garuda's latest financial statement shows it still faces similar lawsuits from other lessors, including SMBC Aviation Capital and Helice Leasing in British and Dutch courts, respectively. At home, cargo carrier My Indo Airlines has sued for 6.6 billion rupiah in unpaid debts, with a court filing showing Garuda also owes a total of 124.6 billion rupiah to another eight creditors.

With bad news piling up, "the employees and pilots were quite worried about the continuation of Garuda's business," one pilot at Garuda told Nikkei Asia. "The atmosphere in the office is restless."

Employees have already been hit hard: a 50% drop in salary for directors and commissioners, and cuts of 30% to 50% for staff at all levels were agreed at the company's Aug. 13 shareholder meeting. As of June, some 1,000 people had applied for an early retirement scheme. Since 2011, a minority shareholding has been listed on the Indonesia Stock Exchange. The stock has remained below the IPO price of 750 rupiah for most of the period.   © Reuters

Garuda was founded in 1949 as President Sukarno wanted a national airline in the wake of Indonesia's independence a few years earlier. It has navigated many challenges over its history -- the Asian Financial Crisis in the late 1990s, the drop in tourist demand after the Bali bombings in 2002 and the Indian Ocean earthquake and tsunami in 2004, to name a few.

Since 2011, a minority shareholding has been listed on the Indonesia Stock Exchange but the stock has remained below the IPO price of 750 rupiah for most of the time. Aside from the government's 60% holding, Trans Airways, a company affiliated with Chairul Tanjung, founder of Indonesian conglomerate CT Corp., owns 28% of the shares. Trading was suspended in mid-June following the sukuk default, with the shares some 70% below the IPO price.

In June, Garuda appointed Guggenheim Securities as a financial adviser to assist with the restructuring efforts. Alongside its existing advisers Mandiri Sekuritas, Cleary Gottlieb Steen Hamilton and Assegaf Hamzah Partners, Guggenheim will "support the company as it continues to evaluate all strategic alternatives," according to a stock exchange filing at the time.

Garuda's management is currently exploring two avenues to salvage the company, according to an executive who asked not to be named. One is a so-called suspension of debt payment obligations, also known as a PKPU, which would place a moratorium on debt payments for a court-mandated period. The other is a debt to equity conversion.

Both are fraught with difficulty. The former could lead to the court declaring Garuda bankrupt, should no agreement be reached with creditors. The latter requires agreement from existing shareholders, including the government, as it will lead to the dilution of their share ownership. It is unclear what would happen to the government's majority control in that scenario if it does not put in more capital. 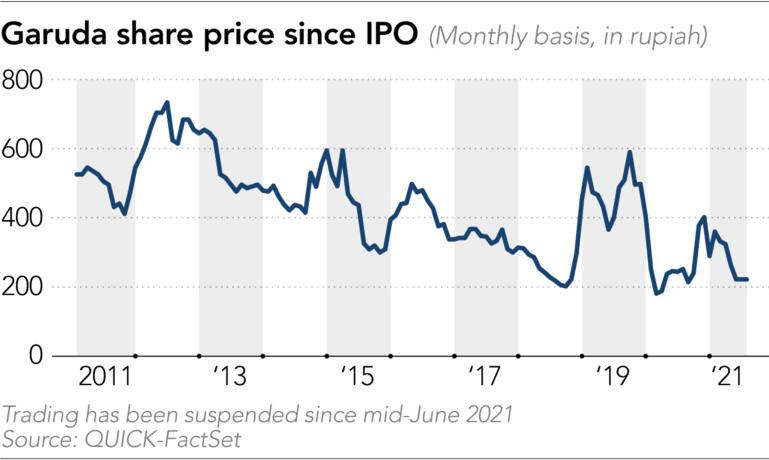 COVID-19 travel restrictions are only partly to blame for Garuda's dire finances. Flights to Saudi Arabia, which accounted for 15% of the carrier's revenue and were one of the few profitable international routes due to the demand for pilgrimages to Mecca, vanished after the country banned international visitors to the holy site last year. Garuda's annual net loss of $2.4 billion last year was its biggest since at least 2005 and company executives said in June that it is still losing around $100 million a month, as it flies less but still pays to lease aircraft.

Industry metrics suggest management did not do enough to reduce costs when the pandemic hit.

Garuda cut available seat miles (ASM) by 52% last year, indicating it was not as nimble as others in shaving off routes and flights. Its peers slashed them by more than 70%. As a result, Garuda's passenger revenue per available seat mile (PRASM) dropped 43% to 5.9 cents in 2020, according to data from FactSet, the largest decline for the region's airlines with data available.

AirAsia, Garuda's closest competitor with data available, only saw a 6.2% drop in PRASM, having shed 74.5% in ASM.

Garuda's financial performance has been lackluster for a while. It lost money in two of the five years before the pandemic, and the profit it was able to eke out in 2019 turned out to be aided by industrywide price collusion. Seven carriers including Garuda kept domestic airfares artificially high, Indonesia's Business Competition Supervisory Commission ruled last year.

A long-standing problem has been international routes. Its status as the nation's flag carrier meant Garuda had to fly overseas, but "international flights have always lost a lot of money [and Garuda] expanded it too much," said Brendan Sobie, a Singapore-based aviation analyst. In the past, Garuda's domestic operations had offset losses from long-haul flights, but with the domestic market suffering from overcapacity and lower yields as low-cost carriers like private airlines Lion Air and AirAsia expanded operations, it became harder for the company to make a profit. 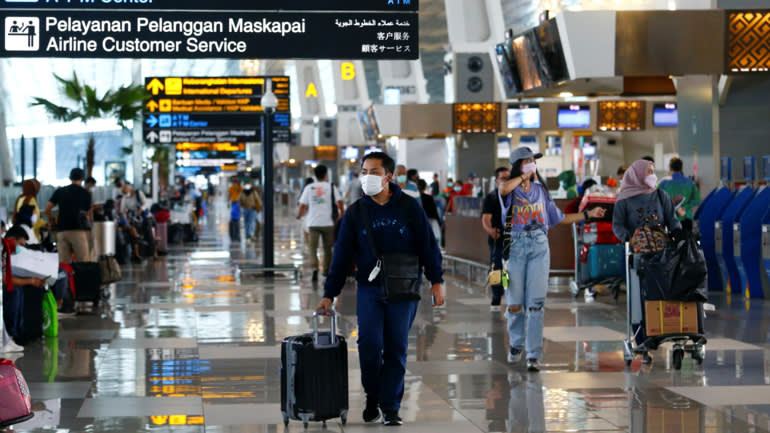 Travelers pass through the Soekarno-Hatta Airport. Garuda's passenger revenue per available seat mile dropped 43% in 2020, the most among the region's airlines.   © Reuters

High costs have also been an issue. When asked about the company's struggles during a parliamentary hearing in June, CEO Irfan Setiaputra said that some aircraft leased before he started in the post were rented "for two times" the standard industry price. "[The lessors explained] this was because we have specifications that are a bit more than the standard, for example, seats are leather, they are made of [expensive] material," he said.

The fact that Garuda has had four different CEOs since 2014 has not helped. Bad company performance, corruption and a worsening relationship with the union are just some of the reasons for the removal of Setiaputra's predecessors.

"Every change in management will inevitably bring with it a change in strategy that requires another transition. This is much more complicated than adopting an existing strategy," said Narendra of Aviatory Indonesia. "Transitions often also cause cost increases such as the strategy of adding aircraft."

Garuda's London route is the best example of the flip-flops. The carrier launched a direct flight connecting London and Jakarta under Arif Wibowo, who led the company from 2014 to 2017, which was then cut by Pahala Mansury, who was only in charge for a year. The route was reinstated, and then suspended again, under Ari Askhara, who was sacked for smuggling motorbike parts and a premium bicycle into the country on a newly delivered plane.

Current CEO Setiaputra, installed in January 2020, has been busy keeping the company afloat during the COVID-19 pandemic, He has announced steps to reduce overheads and free up funds, and a centerpiece of his plan is halving the 142-strong fleet of aircraft by returning them to lessors before their leases are up. The government -- for now at least -- seems intent on reviving Garuda through this business restructuring, even if it means the airline becomes largely domestic.

Garuda "will focus on domestic [routes]. It will not be what it used to be, competing internationally with 60% domestic [routes] and 40% international [routes]," Erick Thohir, Indonesia's minister of state-owned enterprise, said in an interview with local TV in early August. "We have to make [Garuda routes] 90% domestic... [Indonesia is] like the U.S. and China, there are extraordinary [market opportunities for] domestic flights. Post-COVID-19, transformation to an efficient business model is mandatory."

But aviation analyst Lie thinks a mere business restructuring is not good enough. "One thing that has been emphasized by various parties, including the government... is national pride to continue to have a national carrier," he said. "What doesn't seem to be fully understood is that maintaining pride comes with a price. If we want to consistently maintain our pride, we must be willing to pay for it."