Igor Fruman had aided Rudolph Giuliani in his effort to dig up dirt on Donald J. Trump’s political rivals. 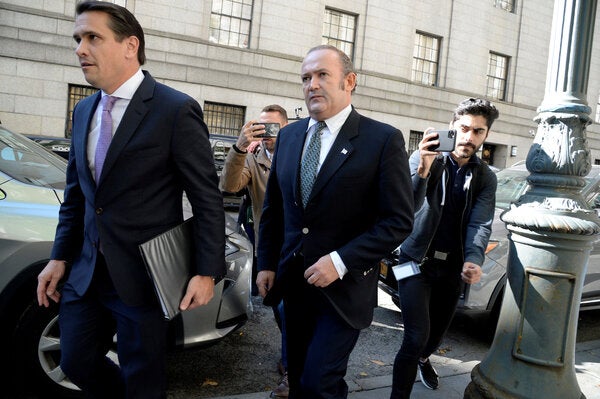 Born in Belarus before moving to Ukraine, Igor Fruman emigrated to the United States in his 20s and later became a citizen. But most of his financial dealings remained in Ukraine. Credit... Jefferson Siegel/Reuters

Igor Fruman, a former associate of Rudolph W. Giuliani who helped him search for damaging information about Donald J. Trump’s political rivals, is expected to plead guilty next month in an unrelated campaign finance case, according to people with knowledge of the matter.

Mr. Fruman, 55, is expected to admit to one count of soliciting foreign campaign contributions after he and others had been accused of funneling money from a Russian source to U.S. elected officials in an effort to win marijuana distribution licenses.

Mr. Fruman and his former business partner Lev Parnas were Soviet-born businessmen who emerged from obscurity in October 2019 when they were arrested on federal charges at Kennedy Airport on their way to Europe. The charges brought intense scrutiny to their association with Mr. Giuliani, who had been working with them in Ukraine to find dirt on Joseph R. Biden Jr., then the former vice president, and oust the American ambassador in Kyiv.

The charges were unconnected to the effort with Mr. Giuliani, and the terms of Mr. Fruman’s plea do not include cooperation with the federal prosecutors in Manhattan who are now investigating Mr. Giuliani for his dealings in Ukraine, the people with knowledge said.

Still, Mr. Fruman, who had been indicted on 10 counts, is likely to avoid a long prison sentence. He was scheduled to appear in Manhattan federal court on Sept. 10.

The prosecutors and Mr. Fruman’s lawyer declined to comment on the expected plea, which was first revealed Monday in a terse entry in the federal court docket. Mr. Parnas, who has broken with Mr. Giuliani and has pleaded not guilty, is still scheduled to stand trial in early October.

Mr. Giuliani is under scrutiny over whether he covertly lobbied the Trump administration on behalf of Ukrainian government officials. The prosecutors have focused on whether Mr. Giuliani acted at the behest of the Ukrainian officials while urging the administration to remove the American ambassador to Ukraine, an incident at the heart of Mr. Trump’s first impeachment trial.

“This plea has nothing to do with Rudy Giuliani,” said his attorney, Robert J. Costello, who added that he was unaware that Mr. Fruman was not required to cooperate with prosecutors, but that “it wouldn’t bother us if he cooperated because Giuliani did nothing wrong.”

In 2018, Mr. Fruman and Mr. Parnas worked their way into Republican donor circles, seemingly overnight, with generous contributions. While enjoying access to Mr. Trump’s universe, they joined up with Mr. Giuliani, who was then the president’s personal lawyer, to find information that would undercut Mr. Trump’s rivals, including the ambassador, Marie L. Yovanovitch, and Mr. Biden, who was then a leading contender for the Democratic presidential nomination. They focused in part on Mr. Biden’s son Hunter Biden, who worked for a Ukrainian energy company.

Their partnership was cut short by the arrest of Mr. Fruman and Mr. Parnas, who were accused of misrepresenting the source of a $325,000 donation to a pro-Trump fund-raising committee.

The donation had been made under the name of an energy company, although that was not the true source of the contribution, prosecutors said. Along with two others, the men were also charged with soliciting the Russian campaign contributions for marijuana licenses.

In September 2020, the prosecutors announced a new round of charges, some of them involving a business Mr. Parnas had started, known as Fraud Guarantee. Mr. Fruman was not connected to that company, but Mr. Parnas had worked on it closely with another associate who had been accused in the marijuana license donations, David Correia.

Mr. Correia pleaded guilty in October to, among other things, duping investors in Fraud Guarantee, which was supposed to offer a kind of insurance against financial swindles. He was sentenced to a year and a day in prison.

In recent months, investigators have appeared to train their focus on Mr. Giuliani. The investigation reached a turning point in April, when the F.B.I. searched Mr. Giuliani’s home and office and seized his electronic devices, in part seeking evidence about his effort to oust the ambassador.

Mr. Giuliani has not been accused of wrongdoing and has said he was acting on behalf of Mr. Trump, not the Ukrainians. He has denounced the F.B.I.’s seizure of his electronic devices as a “corrupt double standard” by the Justice Department, which he said had ignored “blatant crimes” by the Bidens.