The new, potentially fast-spreading B.1.1.529 strain of coronavirus declared a variant of concern by the World Health Organization roiled global markets on Black Friday, raising concerns about how the economy and Wall Street may perform in the coming week, following a selloff that wiped out November gains for the SP 500 index SPX, -0.84% and the Nasdaq Composite COMP, -2.43% and sent the Dow Jones Industrial Average DJIA, -0.06% down by the most in a day since Oct. 28, 2020.

WHO said that they fear that the omicron variant, which has been detected in Belgium, Israel, and Hong Kong and was first identified in southern parts of Africa, is more transmissible than the delta strain that is currently dominant world-wide, and other variants. Early signs, however, suggest that the variant may be less severe.

However, the emergence of the new strain led to the White House announcing restrictions, starting on Monday, on travel for non-U.S. citizens and residents from South Africa, as well as from Botswana, Zimbabwe, Namibia, Lesotho, Eswatini, Mozambique, and Malawi, joining the European Union, the U.K., Singapore and Japan, which also announced similar travel bans.

The market selloff during the abbreviated Black Friday session and the commensurate flight to assets that investors hope will perform better amid fresh mobility restrictions, helped to overshadow the usual focus on retail, on a day associated with heavy consumer spending ahead of the Christmas holiday. Friday’s downturn also offered a crystal clear reminder that the path of the market and economy hinges on the course of COVID.

What isn’t clear is whether the latest coronavirus development will do lasting harm to the complexion of the market. Omicron comes at a fragile time for optimistic investors, with bears pointing to lofty stock market valuations, inflation worries and global economic growth concerns as reasons to expect a drawdown in equities that have managed to avoid a decline from a peak of more than 5%.

The Nasdaq saw its lowest volume of the year on Black Friday, with 3.479 billion shares trading hands, well below the year-to-date average of 5.099 billion. The total composite volume, including trading on Intercontinental Exchange ICE, +0.88% -owned NYSE platforms, was 8.760 billion, compared with an year-to-date average of 11.196 billion, according to Dow Jones Market Data.

Still, only time will tell whether the reaction to omicron is a textbook, knee-jerk selloff or something more sinister.

MarketWatch’s Bill Watts wrote, citing Friday research from Mark Arbeter of Arbeter Investments, that the next level of support to watch for the SP 500 after closing at 4,594,62 on Friday is at 4,570, the 50-day exponential average; 4,566, the 38.2% retracement of the rally; and 4,550, a previous high from early September.

“It is too early to know to what extent the new variant will affect economies and markets, and Friday’s market moves have probably been exacerbated by reduced liquidity owing to the US Thanksgiving holiday, and the risk that further bad news emerges over the weekend,” writes Jonas Goltermann senior markets economist at Capital Economics, in a Friday research note.

J.C. Parets of the All Star Charts blog writes that things could get dicey if the SP 500 is driven below 4,500, with little support beneath that point.

“You know how parents always tell you nothing good ever happens after midnight? Well in the SP 500, nothing good happens below 4500,” he writes in a Friday blog. 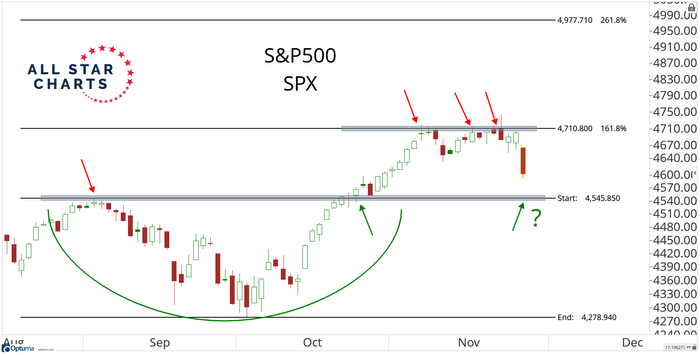 “If we’re below that then there is a probably a much bigger problem out there, and the heaviest cash positions in 18 months would be warranted,” Parets writes.

Some analysts say that there are legitimate reasons for unease, on the public health front.

“The fact that this variant seems to be spreading much faster than previous versions (including the Delta variant) bears very careful monitoring,” wrote Michael Strobaek, global chief investment officer at Credit Suisse, in a research note. There are some questions about the effectiveness of existing COVID vaccines from Pfizer PFE, +4.21% and Moderna MRNA, -0.30% due to the number of mutations that the omicron variant bears on the spike protein. The spike protein is the part of the virus targeted by COVID-19 vaccines.

Analyst at Jefferies led by analyst Sean Darby note that risk-appetite was already edging lower before Black Friday and the selloff may have been a “tipping point” in favor of caution and risk moderation.

“The news of a new or not so new COVID variant spreading in Southern Africa appears to have been the tipping point in altering risk appetite in the past 24 hours,” the Jefferies analyst wrote.

“However, there has been a sea change in risk variables over the past month – an increasing number of ‘tailed treasury auctions’, declining equity market breadth and the imperceptible change in US retail appetite that seems to have gone unnoticed. Positioning in global equities is one of the most aggressive in US history,” according to Darby and his colleagues.

Jefferies research suggests that investors are now expecting that the Federal Reserve, under renominated Chairman Jerome Powell, will hasten the pace of reductions in the central bank’s asset purchases, which will lead to tighter financial conditions that could prove unfavorable to risky assets. Goldman Sachs sees the Fed stepping up tapering to $30 billion a month from a reduction of $15 billion, and estimates three policy interest rate increases in 2022, up from two.

“Ultimately the Sharpe ratio – a measure of return per unit of risk – is turning for global equities. We expect the gap between the performance of risky and safe haven assets to diminish,” Jefferies wrote.

The situation could still prove a buying opportunity for bold investors, however.

Strobaek wrote that “risk assets such as equities are likely to give back some strength, but we would see this as an opportunity in selective and specific areas.”

“At this point, we reiterate our assessment from the latest Investment Committee report, i.e. keeping equities at a small overweight in portfolios and government bonds at an underweight,” the Credit Suisse CIO writes.

Analysts at Citigroup also said that “we would buy into any dip,” noting that its bearish checklist doesn’t indicate significant red flags. “Valuations look stretched, but other factors (credit spreads, fund flows) are not yet especially extended,” Citi writes, with 7.5 out of 18 red flags triggered in its measures of global markets while the U.S. is seeing 9.5 of 18. 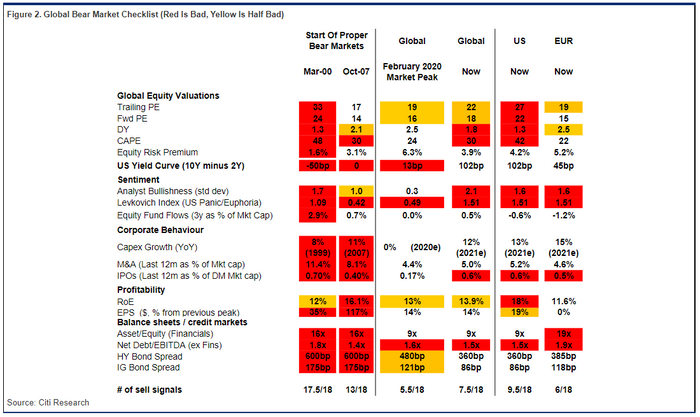 Greg Bassuk, CEO at AXS Investments in Port Chester, NY says that the end-of-week selling may have resulted in a Black Friday sale for stock-market investors.

“Black Friday is typically the unofficial kick-off to the annual holiday shopping season. But we believe the real shopping is for stocks that are beaten-down from Covid infection spikes, inflation fears, and supply chain woes, but that still possess strong fundamentals that will drive their gains as the economy ultimately reopens,” he wrote

That said, some analysts note that the lockdowns playing out in Europe and the spread of COVID, even before the omicron declaration, were reasons to be cautious since they will impact the global growth outlook.

Either way, it seems that a degree of caveat emptor may be in force next week and could color trading for the remainder of the 2021.

Trading on Monday will help determine whether bullishness persists or if a bearish phase is crystallizing.

It will be a week focused on the state of employment, with the November U.S. jobs report due at the end of the week and Powell and others offering their final thoughts before a media blackout period starting ahead of the Federal Open Market Committee’s final meeting of 2021 on Dec. 14-15.

What’s on the economic calendar?

A report on pending home sales at 10 a.m. Eastern Time