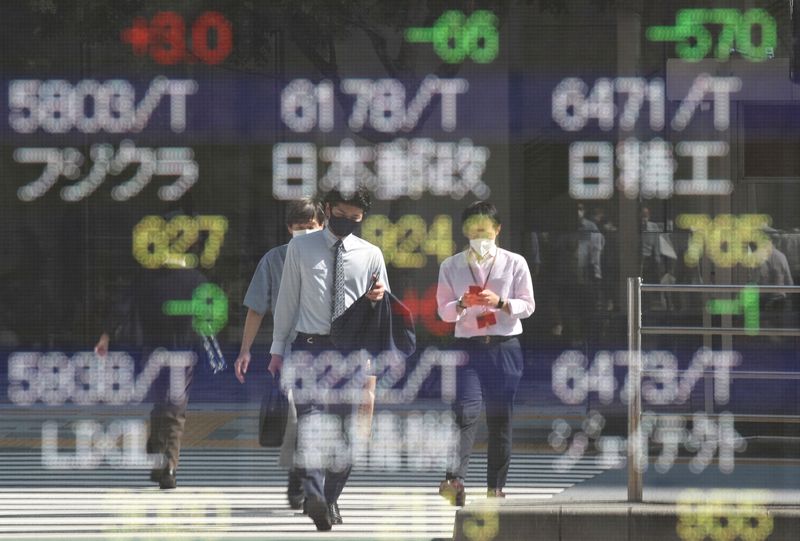 WASHINGTON (Reuters) - Global stock markets reversed gains after a day-long rally on Thursday even as fresh U.S. economic data indicated that a recent uptick of Omicron COVID-19 variant-related infections has not yet led to a surge in layoffs, a positive sign for the economy.

Thin trading volumes, which led to a dip in oil and a climb in the dollar, have outweighed earlier investor sentiment that high vaccination rates and signs of milder symptoms caused by the variant mean the economy will avoid a repeat of the disruption seen at the start of the pandemic.

Despite concerns, investors cheered a U.S. Labor Department report that the number of Americans filing for new unemployment claims dropped to a seasonally adjusted 198,000 in the week leading up to Christmas, from a revised 206,000 a week earlier. Economists polled by Reuters had forecast weekly applications would rise to 208,000.

"The fact that nonseasonally adjusted claims were unchanged - at a time when they typically tend to deteriorate - suggests that there has been no impact from Omicron as of yet," economists Thomas Simons and Aneta Markowska at Jefferies wrote.

There was also relief in Asia, where South Korea's 5.1% industrial output surge may indicate some easing of supply chain problems. Chinese shares got a nearly 1% lift from Beijing signaling lower interest rates in 2022, though they are set to end 2021 down 5.5%.

Japanese shares, in their last trading day of the year, slipped 0.4% for a 4.9% annual gain but short of a three-decade top reached in September. Shares in semiconductor superpower Taiwan ended with a 24% annual jump.

However, oil prices have traded mixed, only to close lower, even amid demand growth concerns and news that China had cut its first batch of 2022 crude oil import quotas by 11% in a sign it would act against small inefficient refineries. [O/R]

Markets are concerned about persistent inflation and a resulting hawkish turn by the U.S. Federal Reserve as investors start to price in a first rate hike as early as March .

"We have these headwinds from the pandemic, we had headwinds from energy prices and sky-high inflation rates... but there is a fair chance that many of these factors if not all of these factors will ease in Q1 next year," said Jussi Hiljanen, strategist at SEB. "But for a few months to come it will be very volatile and markets will be tested."

Two-year U.S. Treasury yields have shot up 55 basis points since September to stand at 0.75%, near the highest since March last year. However, reflecting expectations of a relatively short and shallow rate-rise cycle, 10-year yields have reacted far less, last rising 11/32 in price to yield 1.5065%

The dollar ticked up against a basket of rival currencies in holiday-thinned trading. The greenback, which is set for a second month of gains, rose 0.159%, bouncing off a three-week low touched on Wednesday when it was hit by the risk appetite revival.

The yen has run into broad year-end selling over the past week, with the dollar reaching its highest since mid-November at 115.2 yen.

"The front end of the U.S. rates market is pricing more rate hikes back into the curve now so FX may be a battle, once again, between optimism about the global recovery and expectations about the Fed," said Kit Juckes, a strategist at Societe Generale (OTC:).