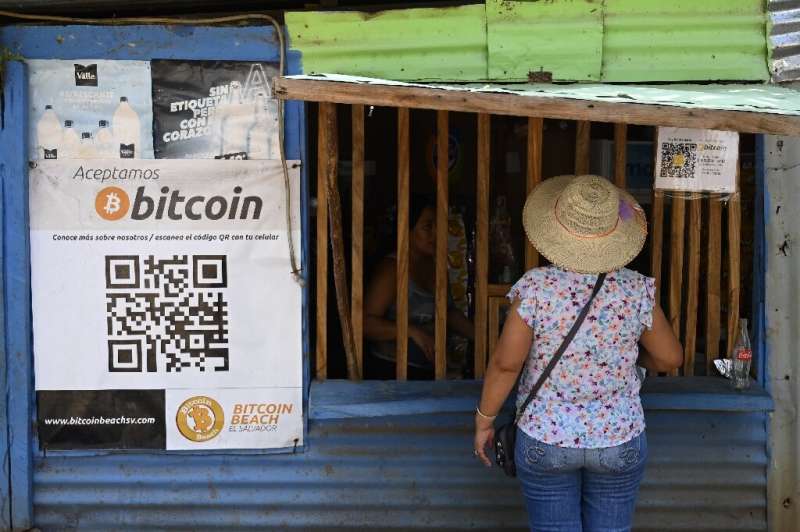 A woman shops in a store that accepts bitcoin in El Zonte, El Salvador, the first country to recognize the cryptocurrency as legal tender.

El Salvador will exempt foreign investors from taxes on profits on bitcoin speculation in the country, a government adviser said Friday, after it became the first to recognize the cryptocurrency as legal tender.

"If a person has assets in bitcoin and makes high profits, there will be no tax. This (is done) obviously to encourage foreign investment," Javier Argueta, legal adviser to President Nayib Bukele, told AFP.

"There will be no taxes to pay on either the capital increase or the income."

El Salvador introduced bitcoin as legal tender on Tuesday alongside the dollar, which has been the official currency for 20 years.

Experts and regulators have highlighted concerns about the cryptocurrency's notorious volatility, its potential impact on price inflation in a country with high poverty and unemployment, and the lack of protection for users.

There are also fears over its potential for illegal use—notably in laundering money from criminal activities such as drug trafficking, and in financing terrorism.

According to Argueta, the cyber "wallet" allowing Salvadorans at home and abroad to buy and spend bitcoin, includes "relevant mechanisms" to ensure traceability.

"We are implementing a series of recommendations from international institutions against money laundering," the adviser added.

He said bitcoin transactions would be halted temporarily if its value were ever to collapse, in order to minimize the impact of extreme currency fluctuation.

The government says its experiment will give many Salvadorans access to bank services for the first time, and hopes it will shave millions of dollars off commissions on remittances sent home from abroad, mainly the United States.

Remittances account for more than a fifth of the country's GDP.

This document is subject to copyright. Apart from any fair dealing for the purpose of private study or research, no part may be reproduced without the written permission. The content is provided for information purposes only.