For two years, the stock market has been largely able to ignore the lived reality of Americans during the pandemic — the mounting coronavirus cases, the loss of lives and livelihoods, the lockdowns — because of underlying policies that kept it buoyant.

Investors can now say goodbye to all that.

Come 2022, the Federal Reserve is expected to raise interest rates to fight inflation, and government programs meant to stimulate the economy during the pandemic will have ended. Those policy changes will cause investors, businesses and consumers to behave differently, and their actions will eventually take some air out of the stock market, according to analysts.

“It’s going to be the first time in almost two years that the Fed’s incremental decisions might force investors or consumers to become a little more wary,” said David Schawel, the chief investment officer at Family Management Corporation, a wealth management firm in New York.

At year’s end, the overarching view on Wall Street is that 2022 will be a bumpier ride, if not quite a roller coaster. In a recent note, analysts at J.P. Morgan said that they expected inflation — currently at 6.8 percent — to “normalize” in coming months, and that the surge of the Omicron variant of the coronavirus was unlikely to lower economic growth.

LPL Financial, a brokerage, had a similar take, saying interest rates will move “modestly higher” in 2022.

The SP 500 stock index had a great run in 2021, rising more than 25 percent — on top of its 16 percent gain during the first year of the pandemic. The index hit 70 new closing highs in 2021, second only to 1995, when there were 77, said Howard Silverblatt, an analyst at SP Dow Jones Indices. Shares on Friday fell slightly.

The market continued to rise through political, social and economic tensions: On Jan. 7, the day after a pro-Trump mob stormed the U.S. Capitol, the SP set another record. Millions of amateur investors, stuck at home during the pandemic, piled into the stock market, too, buying up shares of all kinds of companies — even those that no one expects will earn money, like the video game retailer GameStop.

Wall Street also remained bullish on business prospects in China despite Beijing’s growing tension with the United States and tightening grip on Chinese companies. Waves of coronavirus variants, from Delta to Omicron, and a global death toll that crossed five million did not deter the stock market’s rise; its recovery after each bout of panic was faster than the previous one.

“2021 was a terrific year for the equity markets,” said Anu Gaggar, the global investment strategist for Commonwealth Financial Network, in an emailed note. “Between federal stimulus keeping the economy going, easy monetary policy from the Fed keeping markets liquid and interest rates low, and the ongoing medical improvement leading to surprising growth, markets have been in the best of all possible worlds.”

The past year also seemed promising at first for new stock offerings, and nearly 400 private companies raised $142.5 billion in 2021. But investors had sold off many of the newly listed stocks on the New York Stock Exchange or Nasdaq by the end of the year. The Renaissance IPO exchange-traded fund, which tracks initial public offerings, is down about 9 percent for the year.

Shares of Oatly, which makes an oat-based alternative to dairy milk, soared 30 percent when the company went public in May but are now trading 60 percent lower than their opening-day closing price. The stock-trading start-up Robinhood and the dating app Bumble, two other big public debuts, were down about 50 percent for 2021. 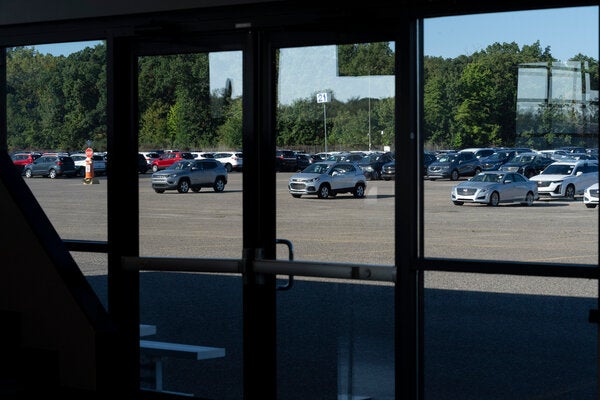 A wholesale dealer car auction in Carleton, Mich. The stock market appeared slow to react to rising prices this year, like those for used cars. Credit... Sarah Rice for The New York Times

The first sign that the stock market could end its recent bull run appeared in the second half of 2021 when prices of household goods, gasoline and much more began to rise, sparked by supply chain disruptions stemming from the pandemic. Prices for used cars skyrocketed amid a global computer chip shortage. As Covid-19 vaccination rates improved, businesses trying to reopen had to raise wages to attract and retain employees. Consumer prices climbed 5.7 percent in November from a year earlier — the fastest pace since 1982.

But even when “inflation” had become a buzzword worthy of a headline in The Onion, the stock market appeared slow to react to price increases.

“The market is on the side that inflation is transitory,” said Harry Mamaysky, a professor at Columbia Business School. “If it’s not and the Fed needs to go in and raise interest rates to tame inflation, then things could get a lot worse in terms of markets and economic growth.”

And that is what the Fed has signaled it will do in 2022.

When interest rates go up, borrowing becomes more expensive for both consumers and companies. That can hurt profit margins for companies and make stocks less attractive to investors, while sapping consumer demand because people have less money to spend if their mortgage and other loan payments go up. Over time, that tends to deflate the stock market and reduce demand, which brings inflation back under control.

“I expect 2022 to be a bumpier ride because the returns are not going to come as easy as they did in 2021 or most of 2020,” said Greg McBride, an analyst at Bankrate, a personal finance company. “Even if the economy continues to grow, there will be concerns about valuations as the Fed tightens policy, and that will lead to some heightened volatility.”

Higher interest rates could also dampen investor enthusiasm for stocks because bonds would pay a higher return than they have in recent years. In fact, LPL Financial forecast that the yield on the 10-year Treasury note, one of the most widely tracked government bonds, will rise to between 1.75 percent to 2 percent by the end of 2022.

What is inflation? Inflation is a loss of purchasing power over time, meaning your dollar will not go as far tomorrow as it did today. It is typically expressed as the annual change in prices for everyday goods and services such as food, furniture, apparel, transportation costs and toys.

What causes inflation? It can be the result of rising consumer demand. But inflation can also rise and fall based on developments that have little to do with economic conditions, such as limited oil production and supply chain problems.

Is inflation bad? It depends on the circumstances. Fast price increases spell trouble, but moderate price gains could also lead to higher wages and job growth.

Mr. McBride said the values of many stocks were being supported by extremely low yields on Treasury bonds, especially the 10-year yield, which has held to about 1.5 percent.

“If that yield moves up, investors are going to re-evaluate how much they’re willing to pay for per dollar of earnings for stocks,” he said. Even if corporate profits — which were strong in 2021 — continue to grow in 2022, he added, they are unlikely to expand “at a pace that continues to justify the current price of stocks.” 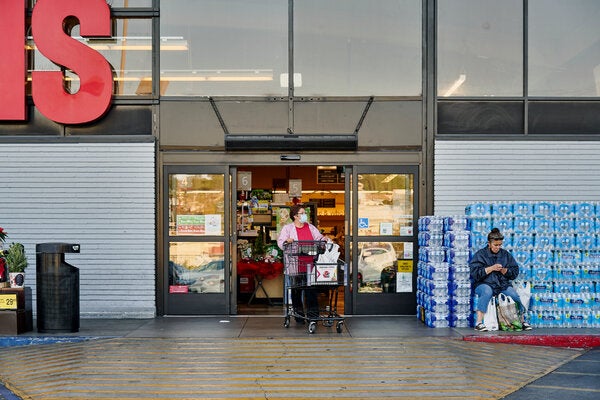 Meat, poultry, fish and egg prices in U.S. cities are up 15 percent since the start of 2020, according to the Bureau of Labor Statistics. Credit... Philip Cheung for The New York Times

Still, what ultimately happens to the stock market in 2022 depends on whether the Fed’s plans to cut inflation by gently tightening monetary policy work as intended.

In addition to an expected rate increase, the Fed is winding down a pandemic-era program that was meant to provide a backstop to the market. In the spring of 2020, the Fed started buying bonds to inject extra cash into the financial system and help companies stay afloat during severe drop-offs in their businesses. The Fed announced in December that it would quicken the pace of pulling back on that aid, set to finish in March.

“The nightmare scenario is: The Fed tightens and it doesn’t help,” said Aaron Brown, a former risk manager of AQR Capital Management who now manages his own money and teaches math at New York University’s Courant Institute of Mathematical Sciences. Mr. Brown said that if the Fed could not orchestrate a “soft landing” for the economy, things could start to get ugly — fast.

And then, he said, the Fed may have to take “very aggressive action like a rate hike to 15 percent, or wage and price controls, like we tried in the ’70s.”

By an equal measure, the Fed’s moves, even if they are moderate, could also cause a sell-off in stocks, corporate bonds and other riskier assets, if investors panic when they realize that the free money that drove their risk-taking to ever greater extremes over the past several years is definitely going away.

Sal Arnuk, a partner and co-founder of Themis Trading, said he expected 2022 to begin with something like “a hiccup.”

“China and Taiwan, Russia and Ukraine — if something happens there or if the Fed surprises everyone with the speed of the taper, there’s going to be some selling,” Mr. Arnuk said. “It could even start in Bitcoin, but then people are going to start selling their Apple, their Google.”