The Dow fell more than 530 points Friday, a drop of around 1.6%. It was a broad-based selloff, with all 30 Dow stocks finishing in the red. Intel ( INTC ), Goldman Sachs ( GS ) and Walgreens ( WBA ) were among the biggest decliners.

The Dow is now on a five-day losing streak, falling nearly 3.5% this week. That's the worst weekly pullback since late January.

The SP 500 and Nasdaq were notably lower as well.

Bullard, who does not have a say on the Fed's policy committee this year but will have a vote in 2022, also said in the interview that the Fed is also starting to discuss the idea of tapering, or cutting back, its bond purchases.

Wall Street is worried about inflation. But investors are also nervous about the Fed taking away the stimulus it injected into the market during the height of the Covid-19 pandemic.

"There is more future volatility ahead," said Bruce Monrad, portfolio manager of Northeast Investors Trust. "It should increase as the Fed starts to think about raising rates and once it starts tapering."

These market gyrations could become more routine, which may alarm investors who have gotten used to more calm on Wall Street.

It's actually been an unusually quiet first half of 2021 — despite the craziness with meme stocks like AMC ( AMC ) and GameStop ( GME ) and the big moves in bitcoin ( XBT ) and other cryptocurrencies. 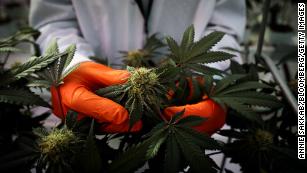 If you look at the broader stock market, and the VIX ( VIX ) volatility index in particular, 2021 has been serene for investors.

"Volatility has been very low because the market overall is supported by improving earnings," said Marco Pirondini, head of equity at Amundi US. "But there is always some speculation in other corners of the market."

The VIX, which many investors refer to as Wall Street's "fear gauge," is now hovering around the pre-pandemic levels of February 2020. It's been steadily declining since peaking in March of last year. The VIX has fallen nearly 15% in 2021.

But the VIX spiked about 10% Friday, and some experts warn that the summer and latter half of 2021 could be a bit bumpier than the first six months of the year.

"When you look at the VIX, it's eerily quiet. But that's a little bit misleading," said Darren Schuringa, CEO and founder of ASYMmetric ETFs, which runs a fund designed to lower investor risk.

Schuringa said he's worried about the "speculative excess" in the meme stocks as well as in the tech sector and thinks that a broader market correction could be on the horizon.

It's also clear, as Friday's market pullback illustrates, that investors are hyperfocused on every little thing the Fed says about interest rates, tapering, inflation and the economy.

"I'm concerned about volatility in the second half of year. There is less room for error," said Daniela Mardarovici, co-head of US multisector fixed income at Macquarie Investment Management. "Even a mild surprise from the Fed could create an aftershock."

Still, it's worth noting that volatility, while rising lately, remains relatively low. Measures of volatility for oil and interest rates have tumbled in recent months, along with the VIX.

"We could see some hiccups ahead. But it's still pretty calm," said Bill Sterling, global strategist with GWK Investment Management.

Investors may also be overreacting to every utterance by Fed members. After all, Bullard is just one person, who doesn't even have a vote until next year. The remaining Fed members still don't think a rate hike is imminent.

"Big changes from the Fed are likely still years away. This volatility might be transitory but it will rear its head every now and then because of more uncertainty," said Marvin Loh, senior global macro strategist with State Street Global Markets.