The crypto sector has been exhibiting bearish signs over the past ten days.

My previous BTC/USD signal on Monday last week produced an excellent and highly profitable short trade from the bearish reversal at $51,912.

Trades may only be taken until 5pm Tokyo time Friday.

The best method to identify a classic “price action reversal” is for an hourly candle to close, such as a pin bar, a doji, an outside or even just an engulfing candle with a higher close. You can exploit these levels or zones by watching the price action that occurs at the given levels.

I wrote on Monday last week that the technical picture had become considerably more bullish. I thought that the support level at $49,576 looked very likely to hold if reached again, especially as it is confluent with the very major psychological round number at $50k.

I noted that Bitcoin seemed to be running out of steam as it got close to the resistance level at $51,912. However, I did not want to take a short trade there, which was unfortunate, as the bearish reversal at that level later that day was the most recent high in Bitcoin and going short there was a very profitable move.

The price of Bitcoin has been moving downwards ever since, and the price has now fallen by more than one third over the past few weeks and is approaching 3-month lows. There has been a broad selloff in cryptocurrencies even as stock markets were rising, which was a bearish sign on crypto, but the blow to risk sentiment we got yesterday from the hawkish surprise in the FOMC meeting minutes has sent crypto even lower.

Although we have medium-term bearish momentum here, it may be that the price is now settling on the support level we see drawn in the price chart below at $42,651 which is quite confluent with the quarter-number at $42,500. I don’t expect the bulls to push the price up much from here, but if we see the price consolidate for at least a few more hours, a breakdown below $42,500 could be an effective short trade entry signal.

I think it will be wise to only trade cryptocurrencies short today. 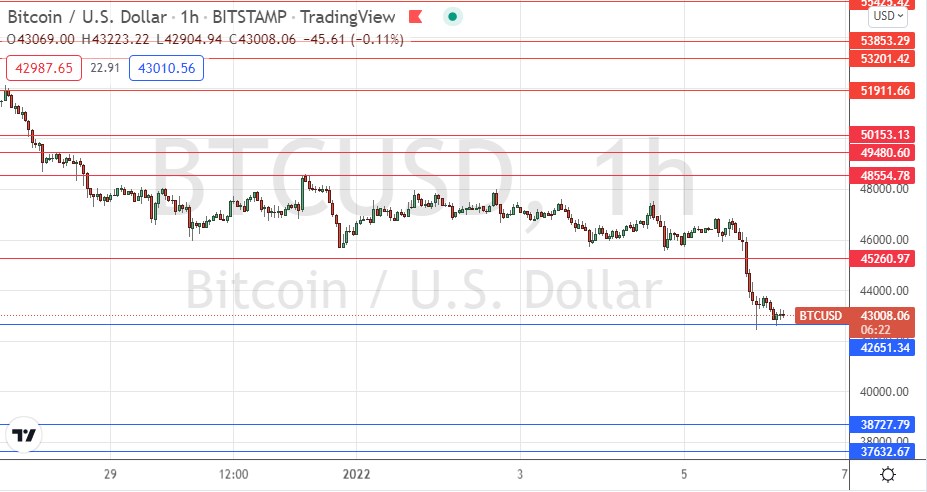 Regarding the USD, there will be a release of ISM Services PMI data at 3pm London time.